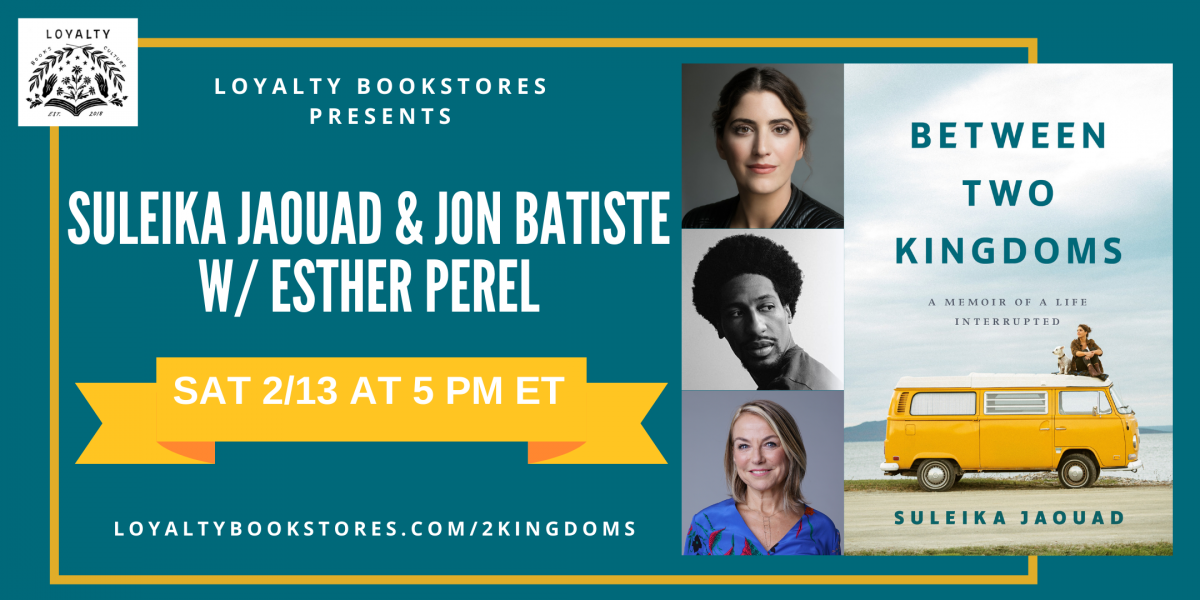 Loyalty is thrilled to host an event with Suleika Jaouad in conversation with Jon Batiste and Esther Perel for Between Two Kingdoms! This event will be held digitally via Crowdcast. Click here to register for the event with a donation of any amount of your choice. Donations will go to First Descents, which provides life-changing outdoor adventures for young adults impacted by cancer and other serious health conditions. You can order the book on our website which will automatically register you for the event and there will also be an option to snag the book during the event.

A searing, deeply moving memoir of illness and recovery that traces one young woman’s journey from diagnosis to remission and, ultimately, a road trip of healing and self-discovery.

“A work of breathtaking creativity.”—Elizabeth Gilbert, author of Eat Pray Love
“Elegant and heartbreaking.”—Siddhartha Mukherjee, author of The Emperor of All Maladies
“Mended parts I thought were forever disintegrated.”—Kiese Laymon, author of Heavy
“A propulsive, soulful story of mourning and gratitude.”—Tara Westover, author of Educated

In the summer after graduating from college, Suleika Jaouad was preparing, as they say in commencement speeches, to enter “the real world.” She had fallen in love and moved to Paris to pursue her dream of becoming a war correspondent. The real world she found, however, would take her into a very different kind of conflict zone.

It started with an itch—first on her feet, then up her legs, like a thousand invisible mosquito bites. Next came the exhaustion, and the six-hour naps that only deepened her fatigue. Then a trip to the doctor and, a few weeks shy of her twenty-third birthday, a diagnosis: leukemia, with a 35 percent chance of survival. Just like that, the life she had imagined for herself had gone up in flames. By the time Jaouad flew home to New York, she had lost her job, her apartment, and her independence. She would spend much of the next four years in a hospital bed, fighting for her life and chronicling the saga in a column for The New York Times.

When Jaouad finally walked out of the cancer ward—after three and a half years of chemo, a clinical trial, and a bone marrow transplant—she was, according to the doctors, cured. But as she would soon learn, a cure is not where the work of healing ends; it’s where it begins. She had spent the past 1,500 days in desperate pursuit of one goal—to survive. And now that she’d done so, she realized that she had no idea how to live.

How would she reenter the world and live again? How could she reclaim what had been lost? Jaouad embarked—with her new best friend, Oscar, a scruffy terrier mutt—on a 100-day, 15,000-mile road trip across the country. She set out to meet some of the strangers who had written to her during her years in the hospital: a teenage girl in Florida also recovering from cancer; a teacher in California grieving the death of her son; a death-row inmate in Texas who’d spent his own years confined to a room. What she learned on this trip is that the divide between sick and well is porous, that the vast majority of us will travel back and forth between these realms throughout our lives. Between Two Kingdoms is a profound chronicle of survivorship and a fierce, tender, and inspiring exploration of what it means to begin again.

Suleika Jaouad is an Emmy Award–winning writer, speaker, cancer survivor, and activist. She served on Barack Obama’s President’s Cancer Panel, and her advocacy work, reporting, and speaking has been featured at the United Nations, on Capitol Hill, and on the TED Talk main stage. When she’s not on the road with her 1972 Volkswagen camper van and her rescue dog Oscar, she lives in Brooklyn.

Jon Batiste is an American virtuoso pianist, bandleader, composer, record producer, educator and actor. As a teenager, he began self-producing and releasing his music on the internet, as well as performing internationally. His major label debut “Hollywood Africans” was nominated for a GRAMMY award for Best American Roots Performance in 2019 and, along with his band Stay Human, he is featured nightly on The Late Show with Stephen Colbert.

Psychotherapist and New York Times bestselling author Esther Perel is recognized as one of today’s most insightful and original voices on modern relationships. Fluent in nine languages, she helms a therapy practice in New York City and serves as an organizational consultant for Fortune 500 companies around the world. Her celebrated TED Talks have garnered more than 30 million views and her international bestsellers Mating in Captivity and The State of Affairs have been translated into more than 30 languages. Esther is also the host of the popular podcasts Where Should We Begin? and How’s Work? Learn more at EstherPerel.com or by following @EstherPerelOfficial on Instagram.

Between Two Kingdoms: A Memoir of a Life Interrupted (Hardcover)