Tia Williams and Elaine Welteroth for SEVEN DAYS IN JUNE 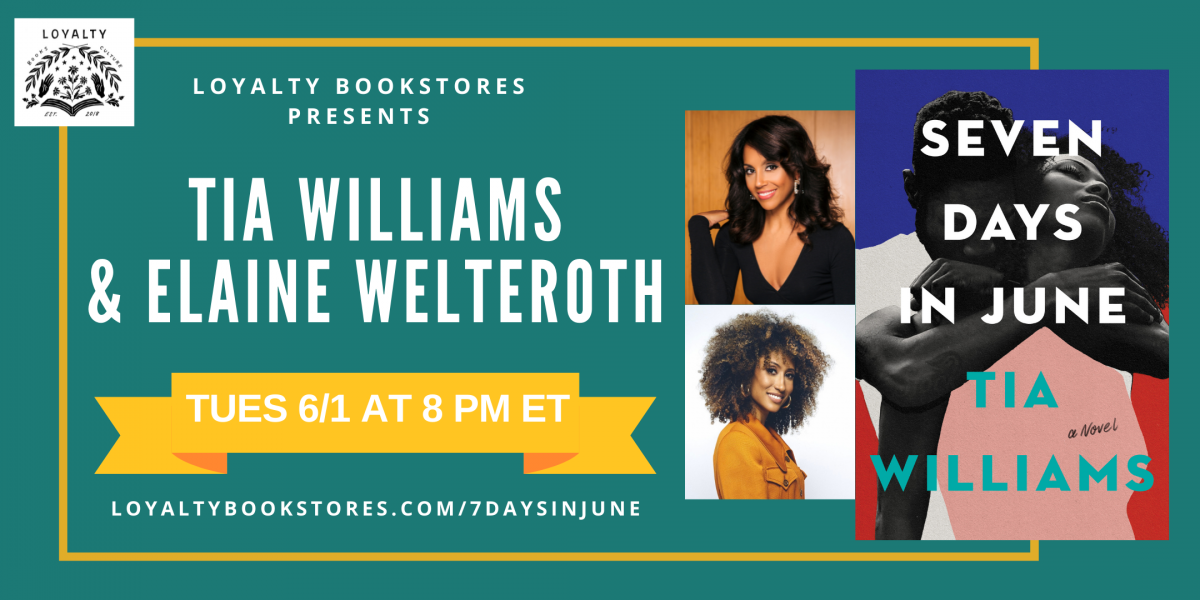 Loyalty is thrilled to celebrate the release of Seven Days in June with Tia Williams and Elaine Welteroth! This event will be held digitally via Crowdcast. Click here to register for the event with a donation of any amount of your choice or you can order the book below to be added to the event's registration list. Donations will go to BLM DC. There will also be an option to snag the book during the event.

“I get asked to endorse a lot of novels, but very few have me laughing out loud and crying with the characters as their hearts are broken and healed. Tia Williams’ book is a smart, sexy testament to Black joy, to the well of strength from which women draw, and to tragic romances that mature into second chances. I absolutely loved it.” —Jodi Picoult, #1 New York Times bestselling author of The Book of Two Ways and Small Great Things

Brooklynite Eva Mercy is a single mom and bestselling erotica writer who is feeling pressed from all sides. Shane Hall is a reclusive, enigmatic, awardwinning literary author who, to everyone’s surprise, shows up in New York. When Shane and Eva meet unexpectedly at a literary event, sparks fly, raising not only their buried traumas, but the eyebrows of New York’s Black literati. What no one knows is that twenty years earlier, teenage Eva and Shane spent one crazy, torrid week madly in love. They may be pretending that everything is fine now, but they can’t deny their chemistry—or the fact that they’ve been secretly writing to each other in their books ever since. Over the next seven days in the middle of a steamy Brooklyn summer, Eva and Shane reconnect, but Eva’s not sure how she can trust the man who broke her heart, and she needs to get him out of New York so that her life can return to normal. But before Shane disappears again, there are a few questions she needs answered… Lush with love, life, motherhood, and an amazing journey to self-acceptance, Seven Days in June is by turns humorous, warm, and deeply sensual.

Tia Williams had a fifteen-year career as a beauty editor for magazines including Elle, Glamour, and Essence. In 2004, she pioneered the beauty blog industry with Shake Your Beauty. She wrote the bestselling novel, The Accidental Diva, and penned two YA novels: It Chicks, and Sixteen Candles. Her award-winning novel, The Perfect Find, will be adapted into a Netflix film starring Gabrielle Union. Tia is currently an Editorial Director at Estee Lauder Companies, and lives with her daughter and husband in Brooklyn.

Elaine Welteroth is a Co-host of CBS “The Talk,” New York Times bestselling author, award-winning  journalist, and former Editor-in-Chief of Teen Vogue. She is known for her groundbreaking work at the  helm of Teen Vogue, where in 2016 she was appointed the youngest ever Editor-in-Chief at a Conde Nast  publication and used her position to prioritize diversity and social justice coverage. She’s now a leading  expert and advocate for the next generation of changemakers. In 2020, Elaine was recently appointed  Cultural Ambassador for Michelle Obama's When We All Vote initiative and in the wake of George Floyd’s  murder, she helped launch the 15 Percent Pledge, a non-profit advocacy organization that recruits major  retailers including Sephora and Macy’s to commit at least 15% of their purchasing power to Black-owned  businesses. She is the host of a new podcast called Built to Last that amplifies the stories of Black  founders, past and present. Her debut book “More Than Enough: Claiming Space for Who You Are No  Matter What They Say” was an immediate New York Times bestseller and won the 2020 NAACP Image  Award for Outstanding Literary Work. She is currently writing and executive producing the book-to television adaptation with Anonymous Content and Paramount Studios. Her work appears in The New  York Times, British Vogue, Glamour, and The Hollywood Reporter. She has also written for the hit show  Grown-ish and has appeared on-camera for a range of media outlets, including ABC News and The View.  She lives with her new husband in Los Angeles, California.

More Than Enough: Claiming Space for Who You Are (No Matter What They Say) (Paperback)