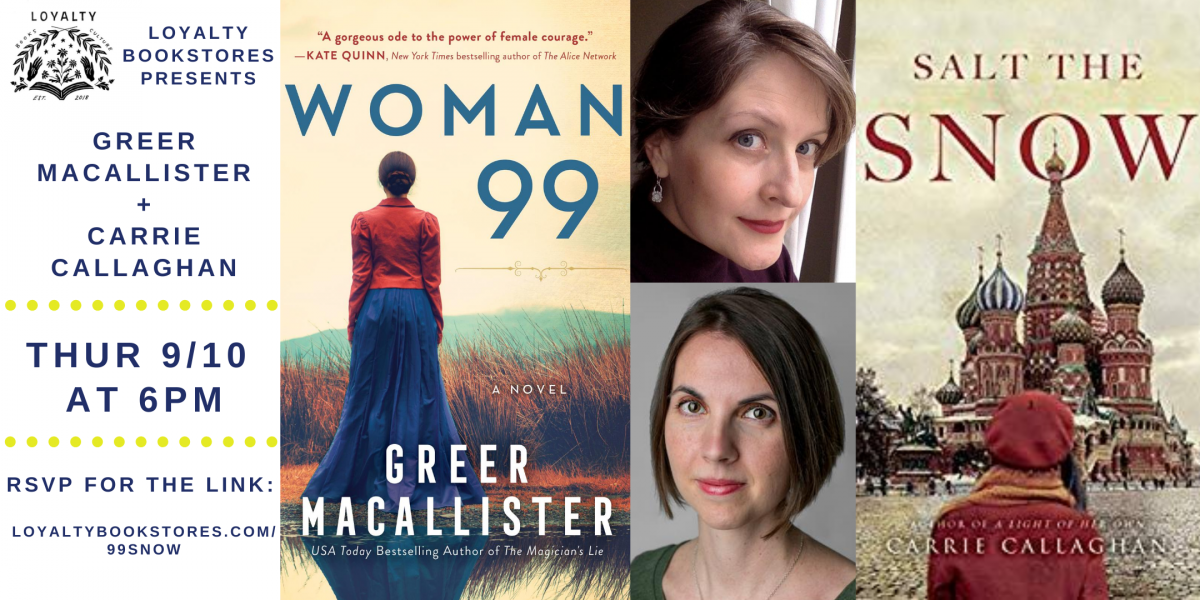 We're so excited to have friends of Loyalty Greer Macallister and Carrie Callaghan for an author chat! This event will be held digitally via Crowdcast. Click here to register for the event with a donation of any amount of your choice. Donations will go to Black Lives Matter DC. You can order the books below and there will also be an option to buy the books during the event.

Woman 99: Charlotte Smith's future is planned to the last detail, but so was her sister's—that is, until Phoebe became a disruption. When their parents commit Phoebe to a notorious asylum, Charlotte knows there's more to the story than madness. Shedding her true identity to become an anonymous inmate, "Woman Ninety-Nine," Charlotte uncovers dangerous secrets that haunt the asylum. Insanity isn't the only reason her fellow inmates were put away—and those in power will do anything to keep the truth, and Charlotte, from getting out.

Salt the Snow: From Carrie Callaghan, author of the critically acclaimed A Light of Her Own, comes a story of the trailblazing and liberated Milly Bennett, based on the life of one of the first female war correspondents whose work has been all but lost to history. American journalist Milly Bennett has covered murders in San Francisco, fires in Hawaii, and a civil war in China, but 1930s Moscow presents her greatest challenge yet. When her young Russian husband is suddenly arrested by the secret police, Milly tries to get him released. But his arrest reveals both painful secrets about her marriage and hard truths about the Soviet state she has been working to serve. Disillusioned, and pulled toward the front lines of a captivating new conflict, Milly must find a way to do the right thing for her husband, her conscience, and her heart.

Raised in the Midwest, Greer Macallister is a novelist, poet and playwright who earned her MFA in creative writing from American University. Her debut novel THE MAGICIAN'S LIE was a USA Today bestseller, an Indie Next pick, and a Target Book Club selection. Her novels GIRL IN DISGUISE (“a rip-roaring, fast-paced treat to read” - Booklist) and WOMAN 99 (“a nail biter that makes you want to stand up and cheer” - Kate Quinn) were inspired by pioneering 19th-century private detective Kate Warne and fearless journalist Nellie Bly, respectively. Her next book, THE ARCTIC FURY, is forthcoming from Sourcebooks in December 2020. A regular contributor to Writer Unboxed and the Chicago Review of Books, she lives with her family in Washington, DC.

Carrie Callaghan is the author of the historical novels A Light of Her Own (2018) and Salt the Snow (2020). Her short stories have been published in multiple literary journals around the country, and she is a senior editor with the Washington Independent Review of Books. She lives in Maryland with her family and ridiculous cat. She loves seasons of all kinds, history, and tea.