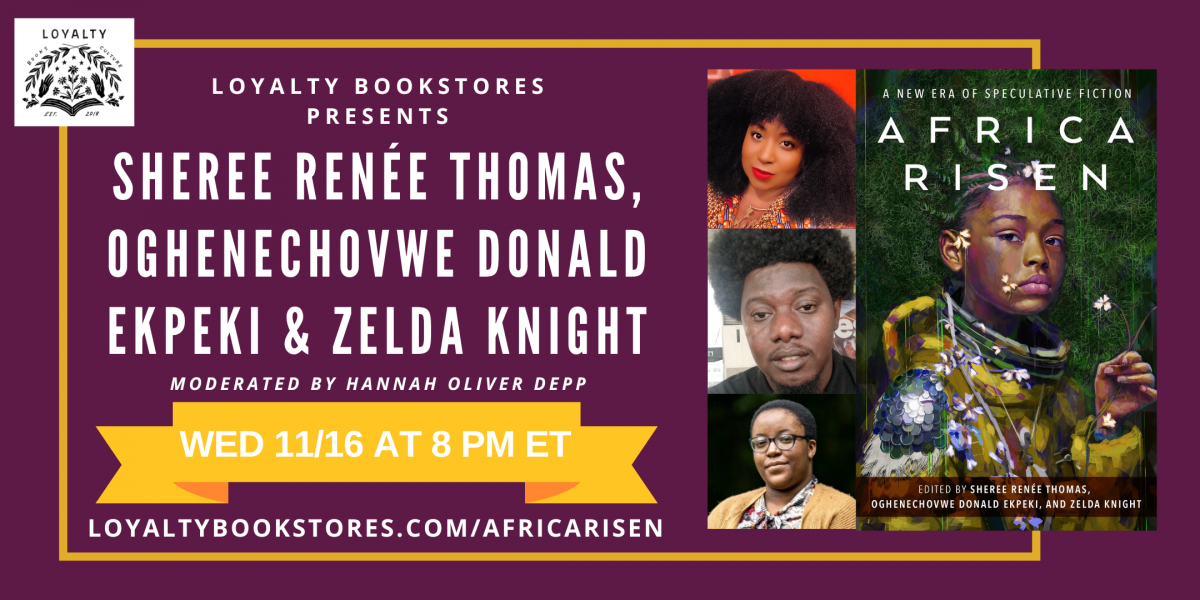 Loyalty is excited to welcome Sheree Renée Thomas, Oghenechovwe Donald Ekpeki, and Zelda Knight, the editors of Africa Risen, for a virtual conversation moderated by Loyalty's own Hannah Oliver Depp! This event will be held digitally via Crowdcast. Click here to register for the event with a donation of any amount of your choice. You can also order the book below to be automatically added to the event's registration list. Donations will go to the Marsha P. Johnson Institute. There will also be an option to snag the book during the event.

"[A] magnificent and wide-ranging anthology . . . A must-read for all genre fans."—Publishers Weekly, starred review

A group of cabinet ministers query a supercomputer containing the minds of the country’s ancestors. A child robot on a dying planet uncovers signs of fragile new life. A descendent of a rain goddess inherits her grandmother’s ability to change her appearance—and perhaps the world.

Created in the legacy of the seminal, award-winning anthology series Dark Matter, Africa Risen celebrates the vibrancy, diversity, and reach of African and Afro-Diasporic SFF and reaffirms that Africa is not rising—it’s already here.

SHEREE RENÉE THOMAS is an award-winning fiction writer, poet, and editor. Her work is inspired by myth and folklore, natural science and the genius of the Mississippi Delta. She is a co-editor of Africa Risen: A New Era of Speculative Fiction (Tordotcom) and Trouble the Waters: Tales of the Deep Blue (Third Man Books). Her fiction collection, Nine Bar Blues: Stories from an Ancient Future was a Finalist for the 2021 Ignyte, Locus, and World Fantasy Awards. She is the editor of The Magazine of Fantasy & Science Fiction, associate editor of Obsidian, and also edited the two-time World Fantasy Award-winning groundbreaking anthologies, Dark Matter: A Century of Speculative Fiction from the African Diaspora and Dark Matter: Reading the Bones (Grand Central). She lives in Memphis, Tennessee near a river and a pyramid.

OGHENECHOVWE DONALD EKPEKI is an African speculative fiction writer and editor from Nigeria. He won the Nommo Award for best short story by an African in 2019, the 2020 Otherwise Award, and the HWA diversity grant. He has been a finalist for the Nebula, Locus, BSFA, BFA, Sturgeon, This Is Horror, and Nommo awards. He co-edited the Dominion anthology, is guest editor at Interstellar Flight Press, and editor of the first ever Year’s Best African Speculative Fiction anthology. His written works have appeared and are forthcoming in Tor.com, NBC, Strange Horizons, Cosmic Roots and Eldritch Shores, Galaxy’s Edge and more.

ZELDA KNIGHT sells books by day at Pride Book Café, and writes sci-fi and fantasy romance at night. She’s also the publisher and editor-in-chief of Aurelia Leo, an independent Nebula Award-nominated press based in Louisville, Kentucky. Zelda co-edited Dominion: An Anthology of Speculative Fiction from Africa and the African Diaspora (Aurelia Leo, 2020), which has received critical acclaim, and won the 2021 British Fantasy Award for the same anthology. Keep in touch on social media or visit her website authorzknight.com!

Hannah Oliver Depp is the owner of Loyalty Bookstores in Petworth, DC and Silver Spring, MD. Loyalty serves all readers as an intersectional feminist bookstore and programming space. She holds a Masters in English from American University. Oliver Depp is a founding member of the American Booksellers Association’s Committee on Diversity, Equity & Inclusion and serves on the boards of Bookshop.org, An Open Book Foundation, and the New Atlantic Independent Booksellers Association.