Elias Rodriques, Kristen Arnett, and Hannah Oliver Depp for ALL THE WATER I'VE SEEN IS RUNNING 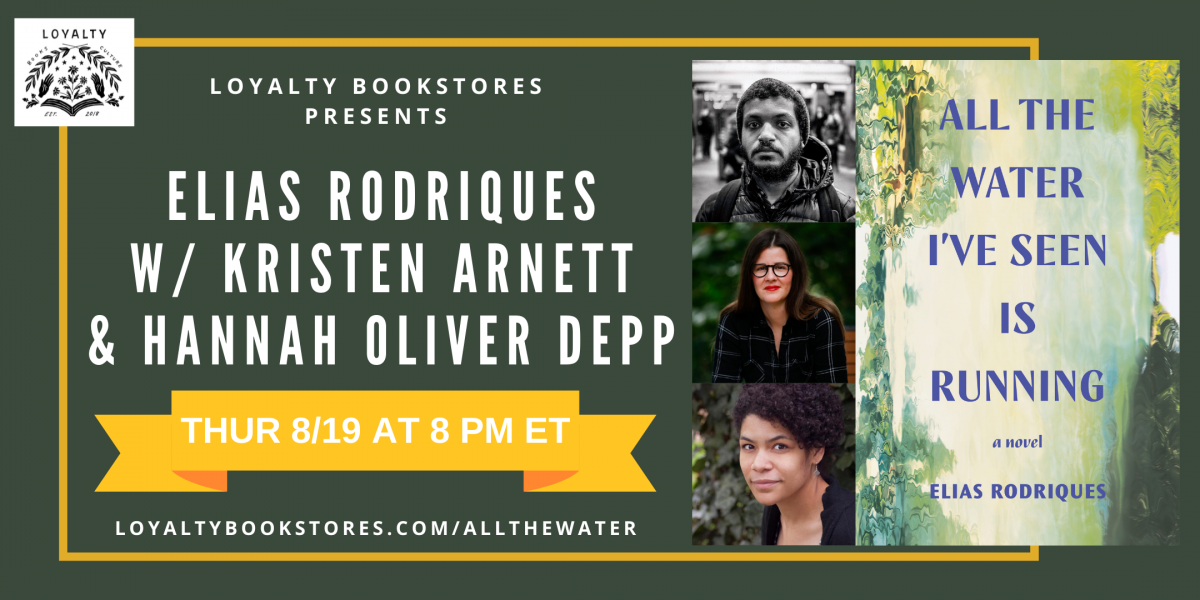 Loyalty is super psyched to welcome Elias Rodriques in conversation with Kristen Arnett and Loyalty's own Hannah Oliver Depp for All the Water I've Seen is Running! This event will be held digitally via Crowdcast. Click here to register for the event with a donation of any amount of your choice or you can order the book below to be added to the event's registration list. Donations will go to BLM DC. There will also be an option to snag the book during the event.

Former high school classmates reckon with the death of a friend in this stunning debut novel.

Along the Intracoastal waterways of North Florida, Daniel and Aubrey navigated adolescence with the electric intensity that radiates from young people defined by otherness: Aubrey, a self-identified "Southern cracker" and Daniel, the mixed-race son of Jamaican immigrants. When the news of Aubrey’s death reaches Daniel in New York, years after they’d lost contact, he is left to grapple with the legacy of his precious and imperfect love for her. At ease now in his own queerness, he is nonetheless drawn back to the muggy haze of his Palm Coast upbringing, tinged by racism and poverty, to find out what happened to Aubrey. Along the way, he reconsiders his and his family’s history, both in Jamaica and in this place he once called home.

Buoyed by his teenage track-team buddies—Twig, a long-distance runner; Desmond, a sprinter; Egypt, Des’s girlfriend; and Jess, a chef—Daniel begins a frantic search for meaning in Aubrey’s death, recklessly confronting the drunken country boy he believes may have killed her. Sensitive to the complexities of class, race, and sexuality both in the American South and in Jamaica, All the Water I’ve Seen Is Running is a novel of uncommon tenderness, grief, and joy. All the while, it evokes the beauty and threat of the place Daniel calls home—where the river meets the ocean.

Elias Rodriques has written for the Guardian, the Nation, Bookforum, and other venues. He is an assistant professor of African American literature at Sarah Lawrence College, and lives in Philadelphia, Pennsylvania.

Kristen Arnett is the author of the New York Times-bestselling novel Mostly Dead Things and the story collection Felt in the Jaw. A queer writer based in Florida, she has written for The New York Times, Guernica, BuzzFeed, McSweeney's, The Guardian, Salon, and elsewhere. She has been a finalist for the Lambda Literary Award and a winner of the Ninth Letter Literary Award in Fiction and the Coil Book Award.

Hannah Oliver Depp is the owner of Loyalty Bookstores in DC and MD. Loyalty is dedicated to diverse and intersectional literature, programs, and gifts for all ages. Oliver Depp has served on multiple ABA committees and is currently on the boards of Bookshop.org and NAIBA.

All the Water I've Seen Is Running: A Novel (Hardcover)

With Teeth: A Novel (Hardcover)