Alexis Daria and Arianna Davis for A LOT LIKE ADIÓS 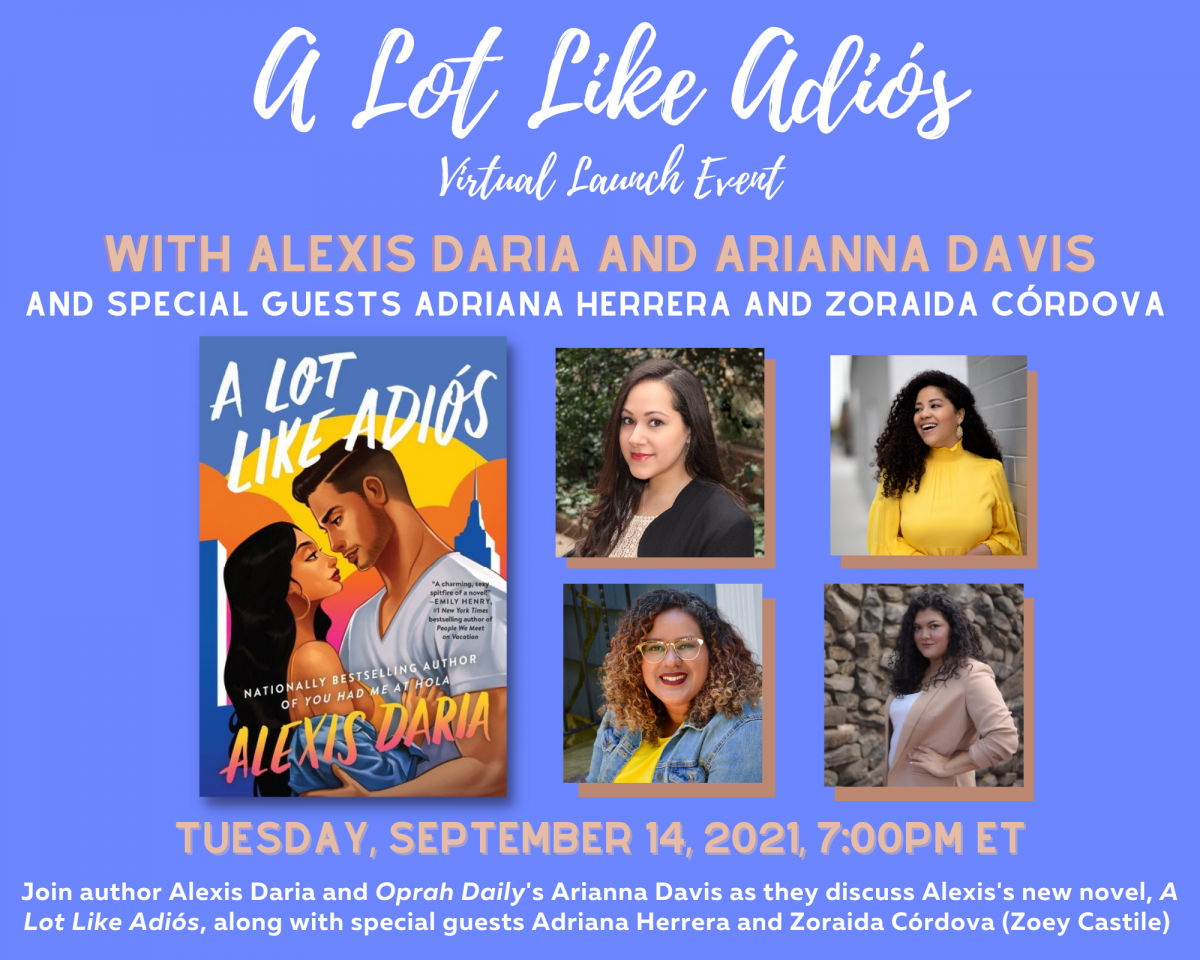 Join author Alexis Daria and Oprah Daily's Arianna Davis as they discuss Alexis's new novel, A Lot Like Adiós, along with special guests Adriana Herrera and Zoraida Córdova (Zoey Castile)! Snag a copy of A Lot Like Adiós to be registered for the event. This event will be held digitally on the publisher's Crowdcast channel. Your book purchase acts as your ticket for the virtual event. Attendees will receive the event link and password directly from the publisher the week of the event. Signed bookplates will be available while supplies last! Please email events@loyaltybookstores.com with any questions.

The national bestselling author of You Had Me at Hola returns with a seductive second-chance romance about a commitment-phobic Latina and her childhood best friend who has finally returned home.

After burning out in her corporate marketing career, Michelle Amato has built a thriving freelance business as a graphic designer. So what if her love life is nonexistent? She’s perfectly fine being the black sheep of her marriage-obsessed Puerto Rican-Italian family. Besides, the only guy who ever made her want happily-ever-after disappeared thirteen years ago.

Gabriel Aguilar left the Bronx at eighteen to escape his parents’ demanding expectations, but it also meant saying goodbye to Michelle, his best friend and longtime crush. Now, he’s the successful co-owner of LA’s hottest celebrity gym, with an investor who insists on opening a New York City location. It’s the last place Gabe wants to go, but when Michelle is unexpectedly brought on board to spearhead the new marketing campaign, everything Gabe’s been running from catches up with him.

Michelle is torn between holding Gabe at arm’s length or picking up right where they left off—in her bed. As they work on the campaign, old feelings resurface, and their reunion takes a sexy turn. Facing mounting pressure from their families—who think they’re dating—and growing uncertainty about their futures, can they resolve their past mistakes, or is it only a matter of time before Gabe says adiós again?

Alexis Daria is an award-winning contemporary romance author, former artist, and native New Yorker. Her debut, TAKE THE LEAD, was a 2018 RITA® Award winner for “Best First Book” and was named one of the Best Romance Novels of 2017 by The Washington Post and Entertainment Weekly. She loves social media, and you can find her live-tweeting her favorite TV shows at @alexisdaria, or talking about writing and books on her blog at alexisdaria.com.

Arianna Davis is the Senior Director of Editorial & Strategy at Oprah Daily. In this role, she oversees the digital editorial direction and strategy across the brand. Previously, Arianna was Digital Director of O, The Oprah Magazine, which launched OprahMag.com in 2018, the fastest-growing site launch in Hearst Magazines' history, and a senior features writer at Refinery29 who specialized in features, pop-culture, personal essays, and topics relevant to Black and Latina women. She was also an on-camera personality who hosted and produced several live events and video series.

You Had Me at Hola: A Novel (Paperback)

What Would Frida Do?: A Guide to Living Boldly (Paperback)