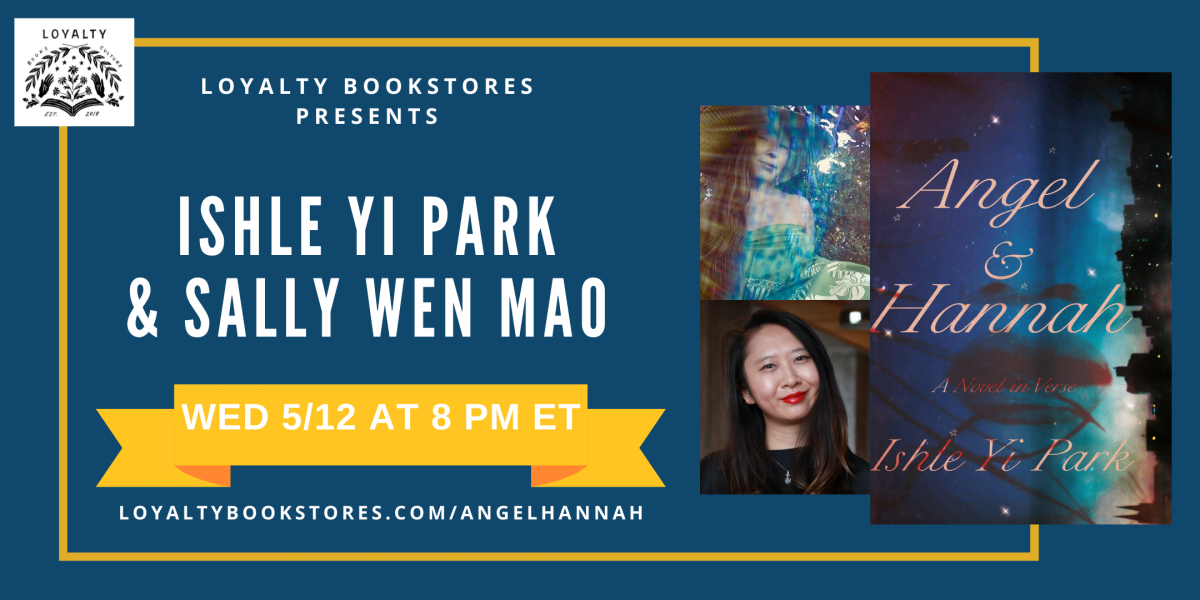 Loyalty is so excited to celebrate the release of Angel & Hannah with Ishle Yi Park and Sally Wen Mao! This event will be held virtually on Crowdcast. Click here to register for the event with a donation of any amount of your choice. Donations will go to Black Lives Matter DC. You can also order the book below to be added to the event's registration list, and there will also be an option to get the book during the event.

The sweeping, unforgettable story of an interracial couple in 1990s New York City who are determined to protect their love against all odds—a reimagining of Romeo and Juliet

Hannah, a Korean American girl from Queens, New York, and Angel, a Puerto Rican boy from Brooklyn, fall in love in the spring of 1993 at a quinceañera:

his eyes. Darkluminous. Warm. A blush
floods her. Hannah sucks in her breath, but
can’t pull back. Music fades. A hush ~
he’s a young buck in the underbrush,

still in a disco ball dance of shadow & light

Their forbidden love instantly and wildly blooms along the Jackie Robinson Expressway.

Told across the changing seasons, Angel & Hannah holds all of the tension and cadence of blank verse while adding dynamic and expressive language rooted in a long tradition of hip-hop and spoken word, creating new and magnetic forms. The poetry of Angel and Hannah’s relationship is dynamic, arresting, observant, and magical, conveying the intimacies and sacrifices of love and family and the devastating realities of struggle and loss.

Ishle Yi Park is the first woman to become Poet Laureate of Queens. Park’s first book of poetry, The Temperature of This Water (2004), won three literary awards, including the PEN America Open Book Award for Outstanding Writers of Color. Her work has been published in Ploughshares, Manoa, The Beacon Best, Best American Poetry, and Century of the Tiger: 100 Years of Korean Culture in America.

She has taught creative writing across the country, and she has performed as a featured artist at over 300 literary festivals, colleges, cultural venues in the United States and worldwide, sharing the stage with artists like: Yasiin Bey, Sonia Sanchez, Joy Harjo, Angela Davis, Saul Williams, and more, and was a touring cast member of Russell Simmons’s Def Poetry Jam, where she toured 51 cities. Angel & Hannah Was performed as part of the Hip Hop Theater Festival's Critical Breaks Reading Series.

An ward-winning poet, singer, hula dancer, surfer, certified yoga teacher, lomi lomi practitioner, and mother, she's traveled the world reading and performing at universities and writing festivals. Park has organized benefits and shared the stage with other activists like Sonia Sanchez and Angela Davis. She is of Korean ancestry and both her daughters were born and are now being raised on the Hawai'ian islands.

ABOUT THE IN CONVERSATION AUTHOR

Sally Wen Mao is the author of two collections of poetry, Oculus (Graywolf Press, 2019), a finalist for the Los Angeles Times Book Prize, and Mad Honey Symposium (Alice James Books, 2014). The recipient of an NEA grant and a Pushcart Prize, she is currently a Shearing Fellow at the Black Mountain Institute.

ISBN: 9781555978259
Availability: Not In Store - Available to special order for pickup or ship. For even speediest shipping we suggest our Bookshop.org page!
Published: Graywolf Press - January 15th, 2019