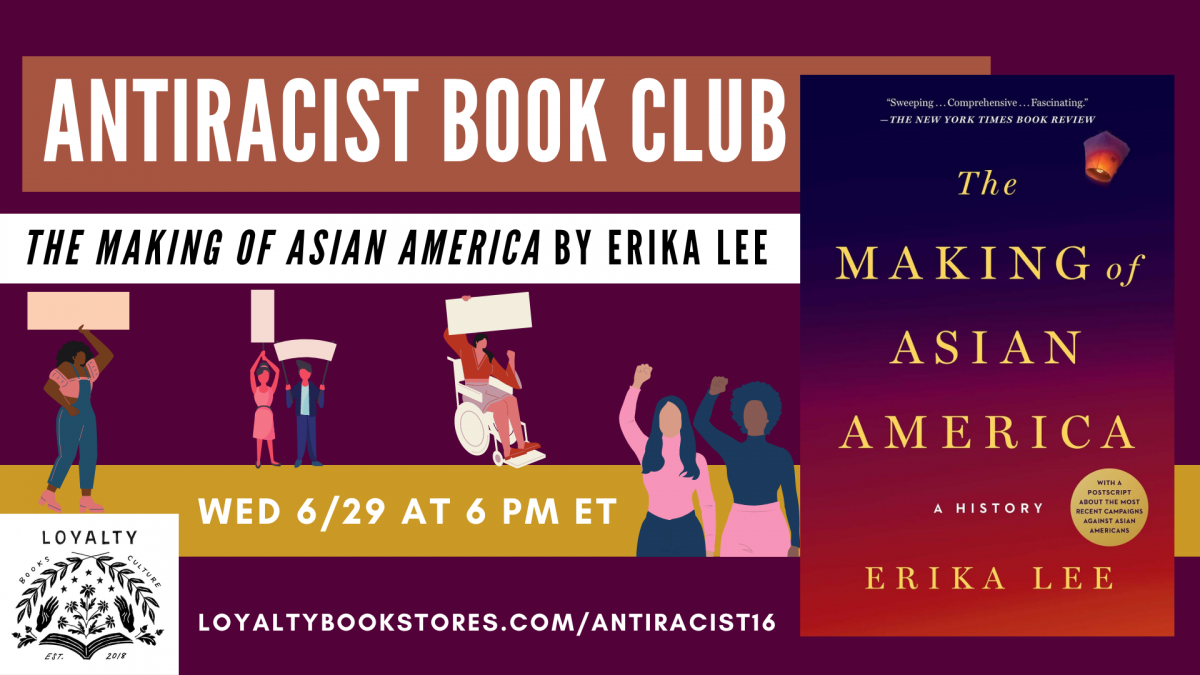 You asked and we answered. We are thrilled to offer our Antiracist Book Club reading program. We'll discuss anti-racist and foundational literature. This month we're chatting about The Making of Asian America by Erika Lee. This is a safe, focused space in which to discuss the systematic structures of racism and the work we can do individually and community wide to dismantle them using the information from our texts and the lessons learned each session. Come as often or as rarely as you like, but we recommend reading How to Be an Anti-Racist as a starting place for discussion! This event is free, but please RSVP below to get the link for the online conversation.

A “comprehensive…fascinating” (The New York Times Book Review) history of Asian Americans and their role in American life, by one of the nation’s preeminent scholars on the subject, with a new afterword about the recent hate crimes against Asian Americans.

In the past fifty years, Asian Americans have helped change the face of America and are now the fastest growing group in the United States. But much of their long history has been forgotten. “In her sweeping, powerful new book, Erika Lee considers the rich, complicated, and sometimes invisible histories of Asians in the United States” (Huffington Post).

The Making of Asian America shows how generations of Asian immigrants and their American-born descendants have made and remade Asian American life, from sailors who came on the first trans-Pacific ships in the 1500 to the Japanese Americans incarcerated during World War II. Over the past fifty years, a new Asian America has emerged out of community activism and the arrival of new immigrants and refugees. But as Lee shows, Asian Americans have continued to struggle as both “despised minorities” and “model minorities,” revealing all the ways that racism has persisted in their lives and in the life of the country.

Published fifty years after the passage of the United States’ Immigration and Nationality Act of 1965, these “powerful Asian American stories…are inspiring, and Lee herself does them justice in a book that is long overdue” (Los Angeles Times). But more than that, The Making of Asian America is an “epic and eye-opening” (Minneapolis Star-Tribune) new way of understanding America itself, its complicated histories of race and immigration, and its place in the world today.

Erika Lee is the granddaughter of Chinese immigrants who entered the United States through both Angel Island and Ellis Island. She grew up in the San Francisco Bay Area and received her PhD from the University of California at Berkeley. She teaches history at the University of Minnesota, where she is also the Rudolph J. Vecoli Chair in Immigration History and Director of the Immigration History Research Center. She is the author of The Making of Asian America, Angel Island (with Judy Yung), and At America’s Gates.

The Making of Asian America: A History (Paperback)