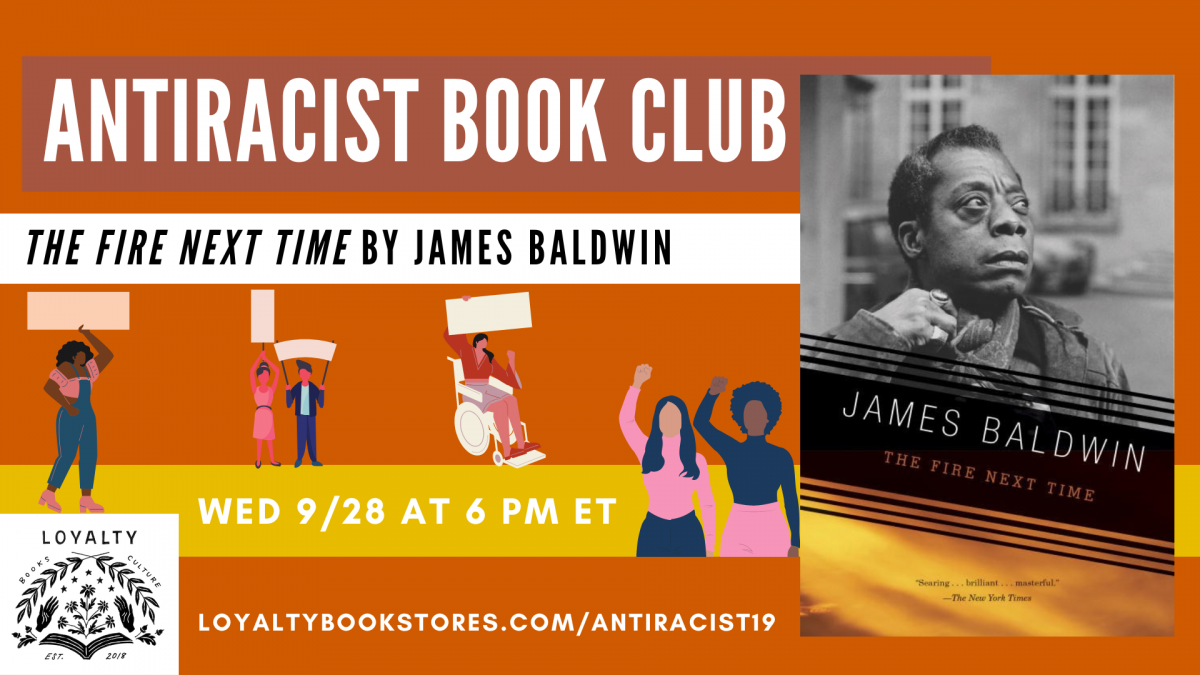 This month, our Antiracist Book Club is fundraising for Baldwin House. To participate in our September book club's virtual discussion of The Fire Next Time by James Baldwin, donate any amount of your choice. You'll receive the Zoom link for the discussion in a confirmation email from Loyalty. All donations in the month of September through Loyalty's donation portal will go to Baldwin House. **If you're unable to donate at this time but would like to participate in our virtual discussion, please email events@loyaltybookstores.com to receive the link. No one will be turned away due to lack of funds!**

Our Mission: To ensure and sustain our collective liberated future in the Howard University neighborhood of Ward 1 and across DC in which safe, stable, and healthy housing, housing communities, neighborhoods, and organizing spaces are grounded in Black, Latinx, native Washingtonian, and other frontline leadership - centering communities that have been historically excluded from generational property ownership. The goal is to create a model of intentional collective living and collective spaces that allow communities the safety to grow, create, and thrive and provides an alternative to break the cycle of displacement and gentrification. Baldwin House would serve both as an affordable residential cooperative and as a commercial hub for Ward 1 Mutual Aid operations, where residents and neighbors contribute to the space.

You asked and we answered. We are thrilled to offer our Antiracist Book Club reading program. We'll discuss anti-racist and foundational literature. This month we're chatting about The Fire Next Time by James Baldwin. This is a safe, focused space in which to discuss the systematic structures of racism and the work we can do individually and community wide to dismantle them using the information from our texts and the lessons learned each session. Come as often or as rarely as you like, but we recommend reading How to Be an Anti-Racist as a starting place for discussion! Please see donation instructions above to get the link for the online conversation.

A national bestseller when it first appeared in 1963, The Fire Next Time galvanized the nation, gave passionate voice to the emerging civil rights movement—and still lights the way to understanding race in America today.

"Basically the finest essay I’ve ever read. . . . Baldwin refused to hold anyone’s hand. He was both direct and beautiful all at once. He did not seem to write to convince you. He wrote beyond you.” —Ta-Nehisi Coates

At once a powerful evocation of James Baldwin's early life in Harlem and a disturbing examination of the consequences of racial injustice, the book is an intensely personal and provocative document from the iconic author of If Beale Street Could Talk and Go Tell It on the Mountain. It consists of two "letters," written on the occasion of the centennial of the Emancipation Proclamation, that exhort Americans, both black and white, to attack the terrible legacy of racism. Described by The New York Times Book Review as "sermon, ultimatum, confession, deposition, testament, and chronicle...all presented in searing, brilliant prose," The Fire Next Time stands as a classic of literature.

JAMES BALDWIN (1924-1987) was a novelist, essayist, playwright, poet, and social critic. His first novel, Go Tell It on the Mountain, appeared in 1953 to excellent reviews, and his essay collections Notes of a Native Son and The Fire Next Time were bestsellers that made him an influential figure in the growing civil rights movement. Baldwin spent much of his life in France, where he moved to escape the racism and homophobia of the United States. He died in France in 1987, a year after being made a Commander of the French Legion of Honor.