Tajja Isen, Nicole Chung, Megha Majumdar, and Matt Ortile for SOME OF MY BEST FRIENDS 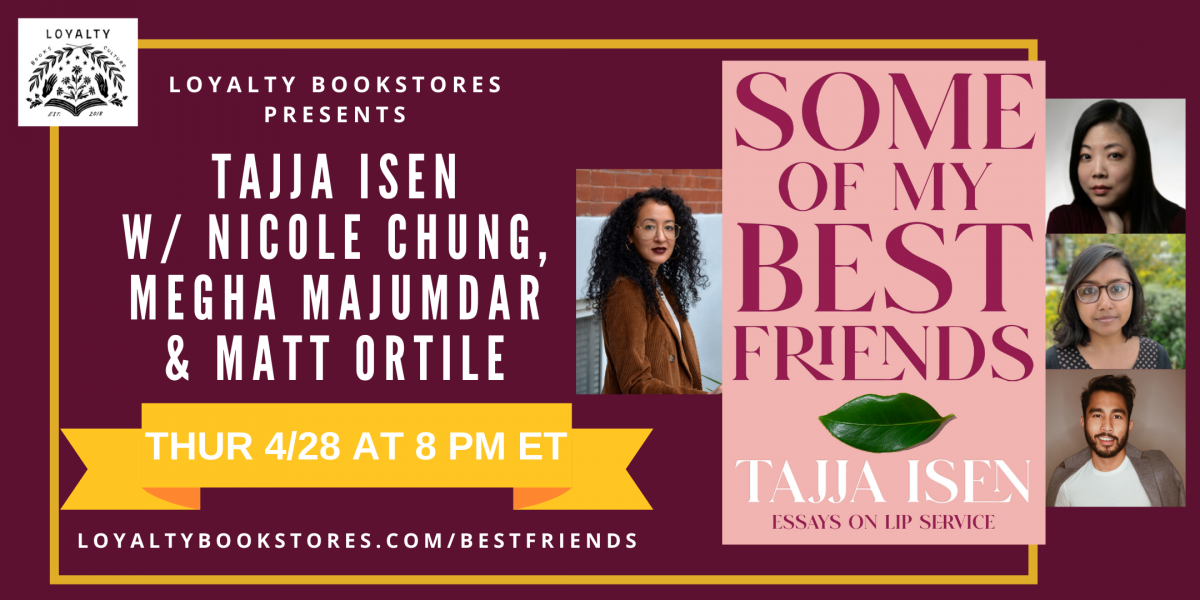 Loyalty is delighted to welcome Tajja Isen, Nicole Chung, Megha Majumdar, and Matt Ortile for a discussion of Some of My Best Friends: Essays on Lip Service!  This event will be held digitally via Crowdcast. Click here to register for the event with a donation of any amount of your choice, or you can order the book below to be added to the event's registration list. Donations will go to BLM DC. There will also be an option to snag the book during the event.

A fearless and darkly comic essay collection about race, justice, and the limits of good intentions.

In this stunning debut collection, Catapult editor-in-chief and award-winning voice actor Tajja Isen explores the absurdity of living in a world that has grown fluent in the language of social justice but doesn’t always follow through.

These nine daring essays explore the sometimes troubling and often awkward nature of that discord. Some of My Best Friends takes on the cartoon industry’s pivot away from colorblind casting, the pursuit of diverse representation in the literary world, the law’s refusal to see inequality, and the cozy fictions of nationalism. Isen deftly examines the quick, cosmetic fixes society makes to address systemic problems, and reveals the unexpected ways they can misfire.

Tajja Isen is a writer, editor, and voice actor. Her essays and criticism have appeared in dozens of outlets across the US and Canada. She is the editor-in-chief of Catapult magazine, the former digital editor of The Walrus, and has also edited for Electric Literature. She is the coeditor of the essay anthology The World As We Knew It: Dispatches from a Changing Climate. A voice actor for over two decades, Tajja can be heard on such animated shows as Atomic Betty, The Berenstain Bears, Super Why!, Go Dog Go, Jane and the Dragon, and many others. You can follow her on Twitter @TajjaIsen.

Nicole Chung is the author of the national bestseller All You Can Ever Know. Named a Best Book of the Year by NPR, The Washington Post, The Boston Globe, and many other outlets, All You Can Ever Know was a finalist for the National Book Critics Circle Award, a semifinalist for the PEN Open Book Award, and an Indies Choice Honor Book. Nicole is currently a contributing writer at The Atlantic, where she writes a weekly newsletter, and her work has also appeared in The New York Times, The New York Times Magazine, GQ, Time, The Guardian, Slate, and Vulture. Prior to joining The Atlantic, she spent five years at the independent publisher Catapult, where she oversaw the digital editorial team, co-edited two anthologies, and helped lead Catapult magazine to its first National Magazine Award. Her next two books are forthcoming from Ecco Books/HarperCollins and HarperTeen.

Megha Majumdar is the author of the New York Times Notable novel A Burning, which was nominated for the National Book Award, the NBCC's John Leonard Prize and the American Library Association's Carnegie Medal. She is the editor in chief at Catapult books, and lives in New York. A Burning is her first book.

Matt Ortile is the author of the essay collection The Groom Will Keep His Name. He is also the executive editor of Catapult magazine, and writes regularly for Condé Nast Traveler. Previously, he was the founding editor of BuzzFeed Philippines. He is a MacDowell Fellow and has written for Vogue, Self, Out, Into, and BuzzFeed News, among others. He is a graduate of Vassar College, which means he now lives in Brooklyn.

Some of My Best Friends: Essays on Lip Service (Hardcover)

A Burning: A novel (Paperback)

The Groom Will Keep His Name: And Other Vows I've Made About Race, Resistance, and Romance (Paperback)

ISBN: 9781541762794
Availability: Not In Store - Available to special order for pickup or ship. For even speediest shipping we suggest our Bookshop.org page!
Published: Bold Type Books - June 2nd, 2020