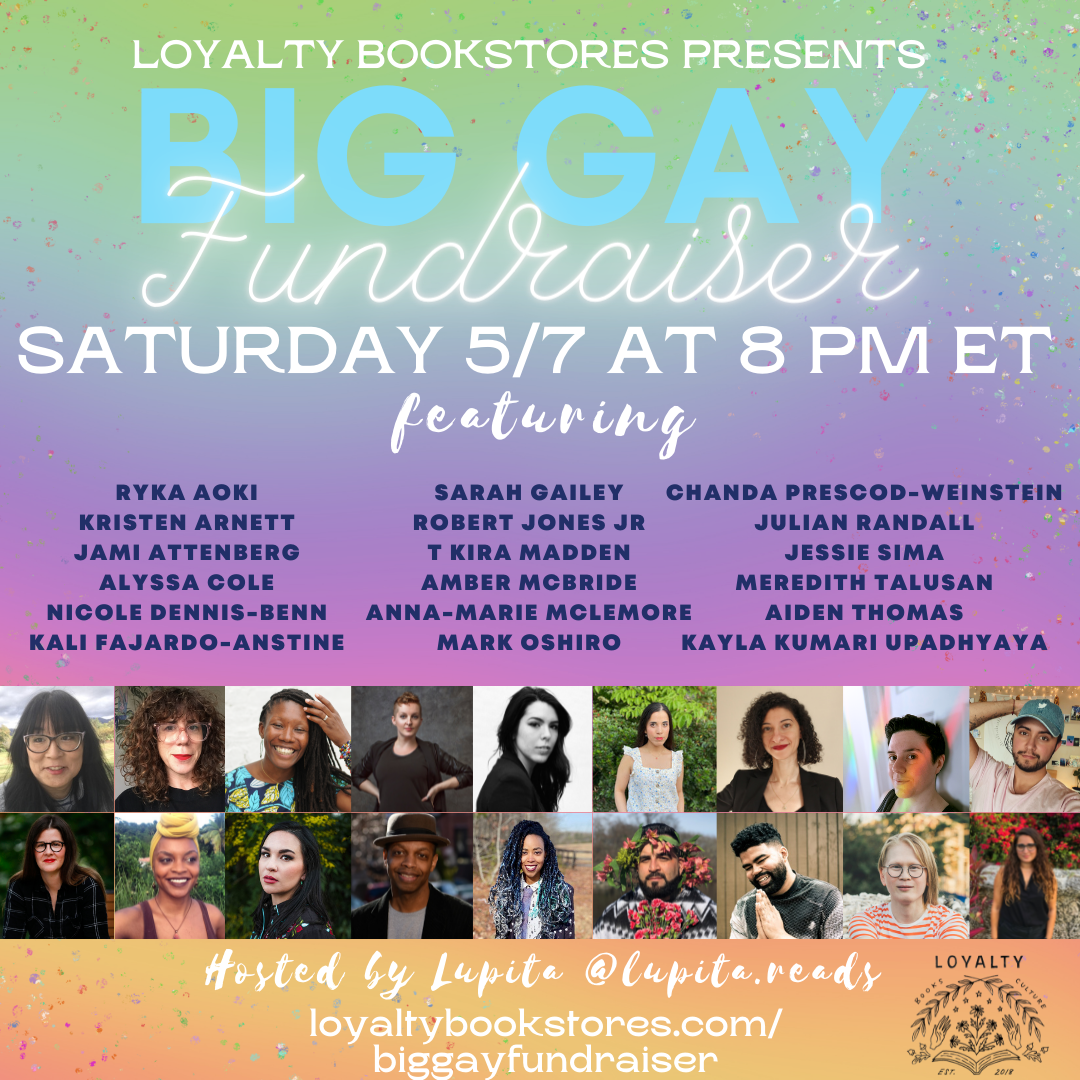 Loyalty is honored to host a virtual reading & fundraiser in support of queer and trans youth with a truly incredible lineup of authors! This event will be held digitally via Crowdcast, with Lupita of @lupita.reads hosting! CLICK HERE to register for the event with a donation of any amount of your choice. All the funds donated as a ticket, as well as 10% of profits from book sales of titles linked to the event, will go to Zebra Coalition, Equality Texas, and Lambda Legal. If you are unable to watch the event live, register for access to watch the replay later. Please email events@loyaltybookstores.com with any questions or inquiries.

Ryka Aoki (she/her) is a poet, composer, teacher, and novelist whose books include Light From Uncommon Stars, He Mele a Hilo and two Lambda Award finalists, Seasonal Velocities and Why Dust Shall Never Settle Upon This Soul. Ryka’s work has appeared or been recognized in publications including Vogue, Elle, Bustle, Autostraddle, PopSugar, and Buzzfeed. Her poetry was featured at the Smithsonian Asian Pacific American Center, and she was honored by the California State Senate for “extraordinary commitment to the visibility and well-being of Transgender people.”

Kristen Arnett is the author of the New York Times-bestselling novel Mostly Dead Things, the story collection Felt in the Jaw, and the novel With Teeth. A queer writer based in Florida, she has written for The New York Times, Guernica, BuzzFeed, McSweeney's, The Guardian, Salon, and elsewhere. She has been a finalist for the Lambda Literary Award and a winner of the Ninth Letter Literary Award in Fiction and the Coil Book Award.

Jami Attenberg is the New York Times bestselling author of seven books of fiction, including The Middlesteins and All This Could Be Yours. She has contributed essays to the New York Times Magazine, the Wall Street Journal, the Sunday Times, and the Guardian, among other publications. She lives in New Orleans.

Alyssa Cole is a New York Times and USA Today Bestselling author of romance (historical, contemporary, and sci-fi) and thrillers. Her Civil War-set espionage romance An Extraordinary Union was the American Library Association’s RUSA Best Romance for 2018, and A Princess in Theory was one of the New York Times’ 100 Notable Books of 2018. She’s contributed to publications including Bustle, Shondaland, The Toast, Vulture, RT Book Reviews, and Heroes and Heartbreakers, and her books have received critical acclaim from The New York Times, Library Journal, BuzzFeed, Kirkus, Booklist, Jezebel, Vulture, Book Riot, Entertainment Weekly, and various other outlets. When she’s not working, she can usually be found watching anime or wrangling her pets.

Kali Fajardo-Anstine is from Denver, Colorado. The author of Sabrina & Corina, a finalist for the National Book Award, the PEN/Bingham Prize, The Clark Prize, The Story Prize, the Saroyan International Prize, and winner of an American Book Award, she is the 2021 recipient of the Addison M. Metcalf Award from the American Academy of Arts and Letters. Her work has been honored with the Denver Mayor’s Award for Global Impact in the Arts and the Mountains and Plains Independent Booksellers Association Reading the West Award. She has written for The New York Times, Harper’s Bazaar, ELLE, O: the Oprah Magazine, The American Scholar, Boston Review, and elsewhere, and has received fellowships from MacDowell, Yaddo, Hedgebrook, and Tin House. Fajardo-Anstine earned her MFA from the University of Wyoming and has lived across the country, from Durango, Colorado, to Key West, Florida. She is the 2022/23 Endowed Chair of Creative Writing at Texas State University. Her debut novel, Woman of Light, will be published in June, 2022.

Sarah Gailey is a Hugo Award Winning and Bestselling author of speculative fiction, short stories, and essays. They have been a finalist for the Hugo, Nebula, and Locus awards for multiple years running. Their bestselling adult novel debut, Magic For Liars, was published by Tor Books in 2019. Their most recent novel, The Echo Wife, and first original comic book series with BOOM! Studios, Eat the Rich, are available now. Their shorter works and essays have been published in Mashable, The Boston Globe, Vice, Tor.com, and the Atlantic. Their work has been translated into seven different languages and published around the world. You can find links to their work at sarahgailey.com and on social media at @gaileyfrey.

Robert Jones, Jr., is the author of the New York Times bestseller,The Prophets, which was a finalist for the 2021 National Book Award for Fiction. His writings have been featured in The New York Times, Essence, and The Paris Review, as well as the critically acclaimed anthologies Four Hundred Souls and The 1619 Project. He is the creator and curator of the social-justice, social-media community Son of Baldwin, which has over 300,000 followers across platforms.

T Kira Mahealani Madden is a lesbian APIA writer, photographer, and amateur magician living in Hudson Valley, New York. She holds an MFA in creative writing from Sarah Lawrence College and an BA in design and literature from Parsons School of Design and Eugene Lang College. She is the founding Editor-in-chief of No Tokens, a magazine of literature and art, and is a 2017 NYSCA/NYFA Artist Fellow in nonfiction literature from the New York Foundation for the Arts. She has received fellowships from MacDowell, Hedgebrook, Tin House, DISQUIET, Summer Literary Seminars, and Yaddo, where she was selected for the 2017 Linda Collins Endowed Residency Award. She facilitates writing workshops for homeless and formerly incarcerated individuals and currently teaches in the MFA program at Sarah Lawrence College. Her debut memoir, LONG LIVE THE TRIBE OF FATHERLESS GIRLS, was a New York Times Editors' Choice selection, a finalist for the National Book Critics Circle John Leonard Prize, and a finalist for the LAMBDA Literary Award for lesbian memoir. There is no period in her name.

Mark Oshiro is the award-winning author of the young adult books ANGER IS A GIFT (2019 Schneider Family Book Award) and EACH OF US A DESERT, both with Tor Teen, as well as their middle grade books THE INSIDERS and YOU ONLY LIVE ONCE, DAVID BRAVO with Harper Collins. They are also the co-author (with Rick Riordan) of the upcoming PERCY JACKSON novel centered on Nico di Angelo and Will Solace. When not writing, they are trying to pet every dog in the world.

Dr. Chanda Prescod-Weinstein is an assistant professor of physics and astronomy and core faculty in women’s and gender studies at the University of New Hampshire. She is also a columnist for New Scientist and Physics World. Her research in theoretical physics focuses on cosmology, neutron stars, and dark matter. She also does research in Black feminist science, technology, and society studies. Nature recognized her as one of 10 people who shaped science in 2020, and Essence has recognized her as one of “15 Black Women Who Are Paving the Way in STEM and Breaking Barriers.” A cofounder of Particles for Justice, she received the 2017 LGBT+ Physicists Acknowledgement of Excellence Award for her contributions to improving conditions for marginalized people in physics and the 2021 American Physical Society Edward A. Bouchet Award for her contributions to particle cosmology. Originally from East L.A., she divides her time between the New Hampshire Seacoast and Cambridge, Massachusetts.

Julian Randall is a Living Queer Black poet from Chicago. His poetry and essays are published in the New York Times Magazine, POETRY, The Atlantic, and Vibe. He is the recipient of a Pushcart Prize. Julian holds an MFA in Poetry from Ole Miss. His first book, Refuse, won the Cave Canem Poetry Prize and was a finalist for an NAACP Image Award. He was also a contributor to the #1 New York Times-bestseller Black Boy Joy. Julian has previously worked as a youth mentor, teaching writing workshops to children on house arrest. Pilar Ramirez and the Escape from Zafa is his debut children's novel.

Jessie Sima is an author and illustrator of picture books. They grew up in a small town in southern New Jersey and now write and draw in a creaky house in New York State. When not making books, Jessie can be found reading graphic novels, watching spooky movies, and playing outside with dogs.

Aiden Thomas is a trans, Latinx, New York Times bestselling author of young adult novels. They received an MFA in Creative Writing from Mills College. Originally from Oakland, California, they now make their home in Portland, OR. Aiden is notorious for not being able to guess the endings of books and movies, and organizes their bookshelves by color.

Kayla Kumari Upadhyaya is a lesbian writer of essays, short stories, and pop culture criticism living in Miami. She is the managing editor of Autostraddle and the assistant managing editor of TriQuarterly. A 2021 fellow for Lambda Literary's Writers Retreat for Emerging LGBTQ Voices, her fiction appears in McSweeney's, Catapult, The Offing, Joyland, and more. Her queer horror chapbook Helen House will be published by Burrow Press in fall 2022 and is available for preorder here.

With Teeth: A Novel (Hardcover)

I Came All This Way to Meet You: Writing Myself Home (Hardcover)

How to Find a Princess: Runaway Royals (Mass Market)

Woman of Light: A Novel (Hardcover)

Long Live the Tribe of Fatherless Girls: A Memoir (Paperback)

The Disordered Cosmos: A Journey into Dark Matter, Spacetime, and Dreams Deferred (Hardcover)