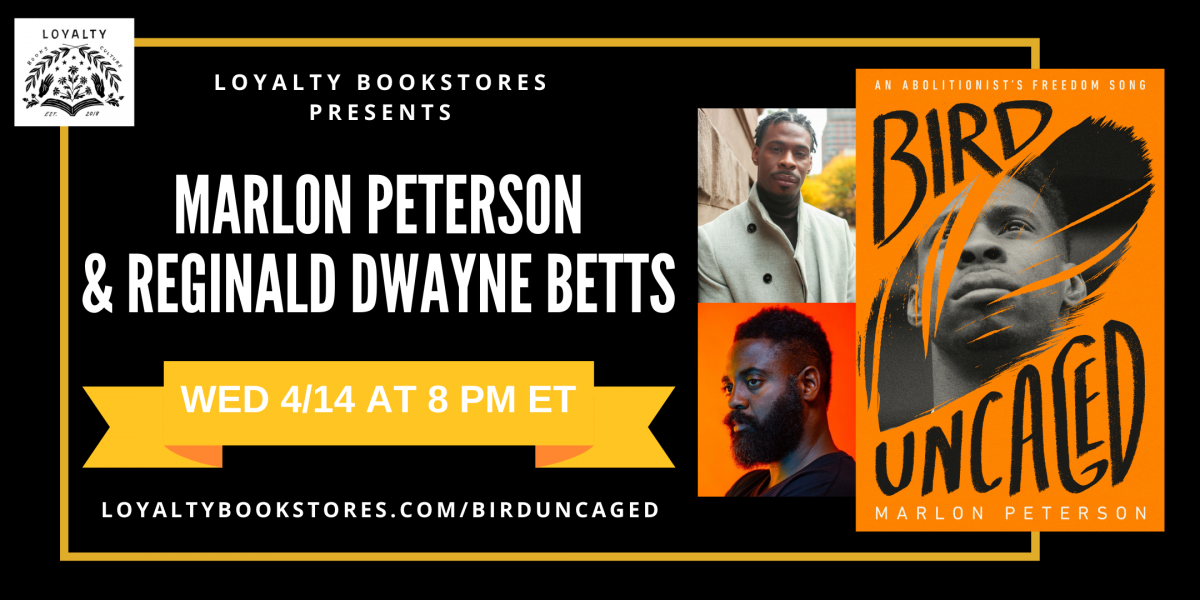 Loyalty is super psyched to welcome Marlon Peterson and Reginald Dwayne Betts to celebrate the release of Bird Uncaged!! This event will be held digitally via Crowdcast. Click here to register for the event with a donation of any amount of your choice or you can order the book below to be added to the event's registration list. Donations will go to New Yorkers Against Violence. There will also be an option to snag the book during the event.

From a leading prison abolitionist, a moving memoir about coming of age in Brooklyn and surviving incarceration—and a call to break free from all the cages that confine us.

Marlon Peterson grew up in 1980s Crown Heights, raised by Trinidadian immigrants. Amid the routine violence that shaped his neighborhood, Marlon became a high-achieving and devout child, the specter of the American dream opening up before him. But in the aftermath of immense trauma, he participated in a robbery that resulted in two murders. At nineteen, Peterson was charged and later convicted. He served ten long years in prison. While incarcerated, Peterson immersed himself in anti-violence activism, education, and prison abolition work.

In Bird Uncaged, Peterson challenges the typical “redemption” narrative and our assumptions about justice. With vulnerability and insight, he uncovers the many cages—from the daily violence and trauma of poverty, to policing, to enforced masculinity, and the brutality of incarceration—created and maintained by American society.

Bird Uncaged is a twenty-first-century abolitionist memoir, and a powerful debut that demands a shift from punishment to healing, an end to prisons, and a new vision of justice.

Marlon Peterson is the principal of The Precedential Group, a social justice consulting firm. He is host of the Decarcerated Podcast, a Senior Atlantic Fellow for Racial Equity, a member of the Aspen Global Leadership Network, and a 2015 recipient of the Soros Justice Fellowship. Ebony Magazine has named him one of America’s 100 most influential and inspiring leaders in the Black community. His TED Talk, “Am I not human? a call for criminal justice reform,” has over 1.2 million views. He contributed to Kiese Laymon’s How to Slowly Kill Yourself and Others in America and Akiba Solomon and Kenrya Rankin’s How We Fight White Supremacy. His writing has appeared in Ebony, The Nation, USA Today, Colorlines, and more. A graduate of New York University, he lives in Brooklyn and plays the steelpan during the summer.

Reginald Dwayne Betts is a poet and lawyer. He is the Director of the Million Book Project, an initiative out of the Yale Law School’s Justice Collaboratory to radically transform the access to literature in prisons. Recently, the Mellon Foundation awarded Betts a 5-million-dollar grant to implement the Million Book Project. For more than twenty-years, he has used his poetry and essays to explore the world of prison and the effects of violence and incarceration on American society. The author of a memoir and three collections of poetry, he has transformed his latest collection of poetry, the American Book Award winning Felon, into a solo theater show that explores the post incarceration experience and lingering consequences of a criminal record through poetry, stories, and engaging with the timeless and transcendental art of papermaking. In 2019, Betts won the National Magazine Award in the Essays and Criticism category for his NY Times Magazine essay that chronicles his journey from prison to becoming a licensed attorney. He has been awarded a Radcliffe Fellowship from Havard’s Radcliffe Institute of Advanced Study, a Guggenheim Fellowship, an Emerson Fellow at New America, and most recently a Civil Society Fellow at Aspen. Betts holds a J.D. from Yale Law School.