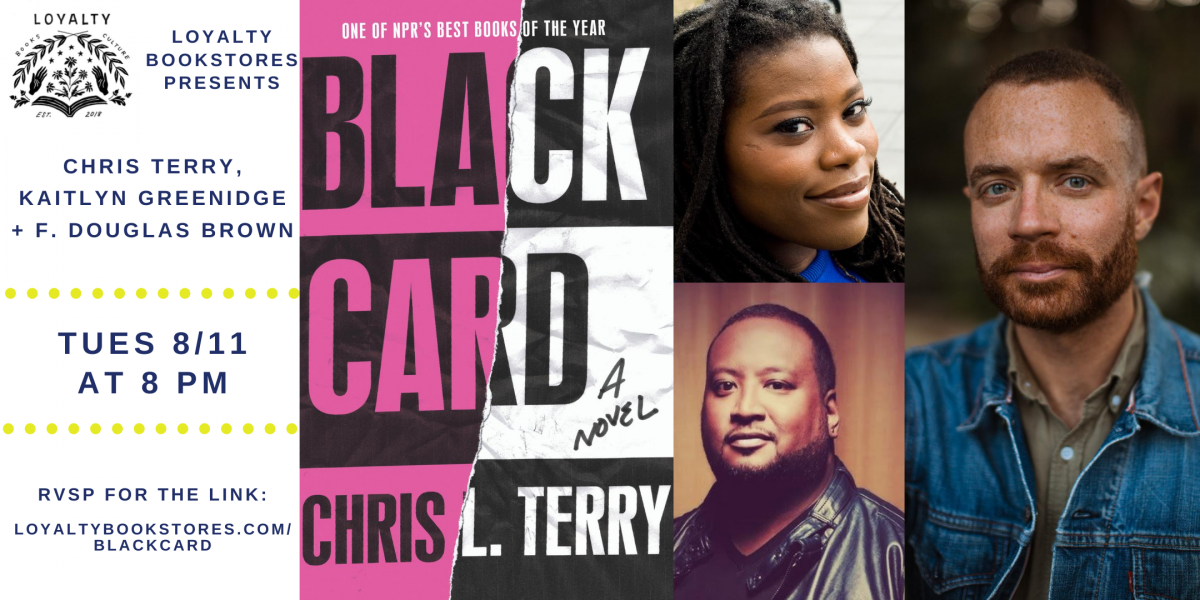 We're psyched to host Chris Terry, Kaitlyn Greenidge, and F. Douglas Brown in a special evening celebrating the paperback release of Black Card. This event will be held digitally via Crowdcast. Click here to register for the event with a donation of any amount of your choice. Donations will go to Black Lives Matter DC. You can order the book below and there will also be an option to buy the book during the event.

Chris L. Terry’s Black Card is an uncompromising examination of American identity. In an effort to be “black enough,” a mixed-race punk rock musician indulges his own stereotypical views of African American life by doing what his white bandmates call “black stuff.” After remaining silent during a racist incident, the unnamed narrator has his Black Card revoked by Lucius, his guide through Richmond, Virginia, where Confederate flags and memorials are a part of everyday life.

Determined to win back his Black Card, the narrator sings rap songs at an all-white country music karaoke night, absorbs black pop culture, and attempts to date his black coworker Mona, who is attacked one night. The narrator becomes the prime suspect and earns the attention of John Donahue, a local police officer with a grudge dating back to high school. Forced to face his past, his relationships with his black father and white mother, and the real consequences and dangers of being black in America, the narrator must choose who he is before the world decides for him.

CHRIS L. TERRY was born in 1979 to an African American father and an Irish American mother. He has an BA in English from Virginia Commonwealth University and a creative writing MFA from Columbia College Chicago. Terry’s debut novel, Zero Fade, was named a Best Book of the Year by Slate and Kirkus Reviews. Terry lives in Los Angeles with his family.

ABOUT THE IN CONVO PARTNERS

Kaitlyn Greenidge's debut novel is We Love You, Charlie Freeman (Algonquin Books), one of the New York Times Critics' Top 10 Books of 2016. Her writing has appeared in the Vogue, Glamour, the Wall Street Journal, Elle.com, Buzzfeed, Transition Magazine, Virginia Quarterly Review, The Believer, American Short Fiction and other places. She is the recipient of fellowships from the Whiting Foundation, the National Endowment for the Arts, the Radcliffe Institute for Advanced Study other places. She was a contributing editor for LENNY Letter and is currently a contributing writer for The New York Times. Her second novel, Libertie, will be published by Algonquin Books in March 2021.

F. Douglas Brown is the author of two poetry collections, ICON (Writ Large Press, 2018), and Zero to Three (University of Georgia, 2014), winner of the 2013 Cave Canem Poetry Prize selected by US Poet Laureate, Tracy K. Smith. He also co-authored with poet Geffrey Davis, Begotten (URB Books, 2016), a chapbook of poetry as part of the Floodgate Poetry Series. Brown currently teaches English and African American Poetry at Loyola High School of Los Angeles. His poems have appeared in the Academy of American Poets, The PBS News Hour, The Virginia Quarterly (VQR), Bat City Review, The Chicago Quarterly Review (CQR), The Southern Humanities Review, The Sugar House Review, Cura Magazine, and Muzzle Magazine. He is co-founder and curator of un::fade::able - The Requiem for Sandra Bland, a quarterly reading series examining restorative justice through poetry as a means to address racism. When he is not teaching, writing or with his children, he is busy DJing in the greater Los Angeles area.