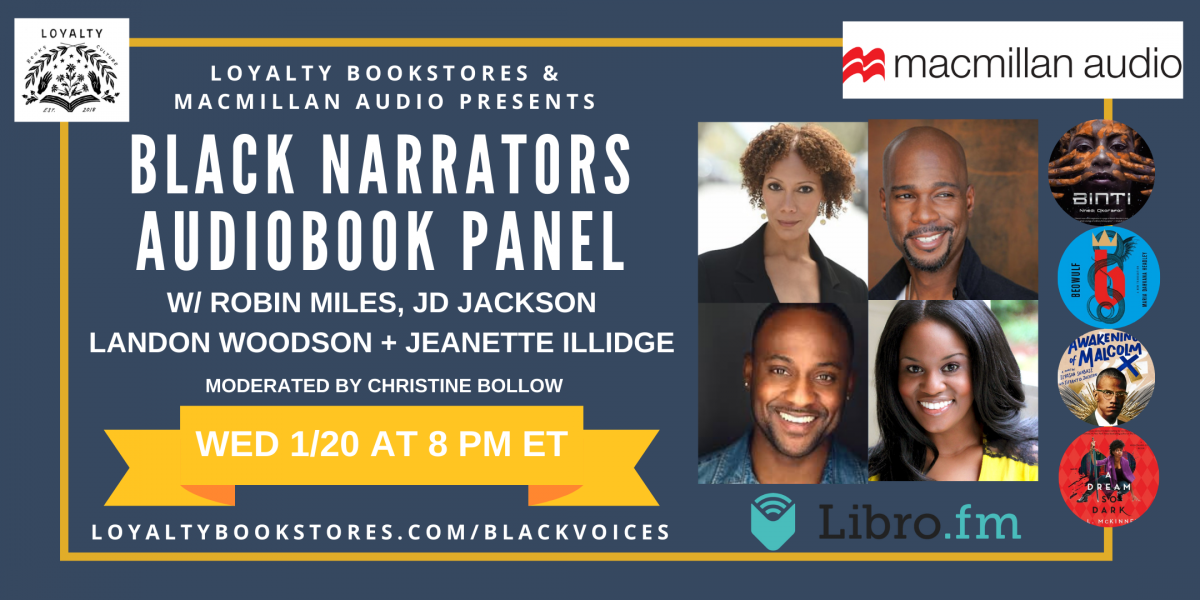 Join Loyalty and Macmillan Audio for a special panel with Black audiobook narrators Robin Miles, JD Jackson, Landon Woodson, and Jeanette Illidge, moderated by Loyalty's programs and marketing manager (and audiobook enthusiast) Christine Bollow! These super talented narrators will discuss how the industry has changed over the years, their unique perspective on books that are changing BIPOC representation, and their experiences about what it's like narrating audiobooks, how they go about interpreting the material, and the preparation that goes into narrating. The event is free to attend but you will need to rsvp via the link below to get the event link and password. Please note the event link and password will be sent in your confirmation email from Eventbrite!

We're thrilled to partner with Libro.fm, who will be offering attendees 25% off select titles narrated by our panelists.

JD Jackson is an actor, audiobook narrator, and acting instructor. He honed his craft while receiving a BA from Dillard University and an MFA from Temple University. He’s enjoyed success in both the film and television industry, guest starring on such shows as House, ER, and Law & Order. He’s won numerous awards for his audiobook narration, including several Earphones Awards, multiple Audie Award nominations, and was recently inducted into AudioFile magazine’s Golden Voices Hall of Fame.

Landon G. Woodson is a native of Passaic, NJ, and a graduate of Rutgers University where he earned an M.F.A. in Acting.  Previous theatre credits include Back to the Real (Crossroads Theatre Company) Soldier's Heart (Premiere Stages) The Mountaintop (Kitchen Theatre Company), To Kill a Mockingbird (Syracuse Stage), This is Modern Art (Blessed Unrest), Intimate Apparel (Sierra Repertory Theatre) and The Whistleblower (Denver Center for the Performing Arts) Upcoming Audiobook credits include "The Awakening of Malcolm X" by Ilyasah Shabazz and "Crossing the Line" by Kareem Rosser. For more updates check out www.landongwoodson.com

A member of Actor’s Equity Association, Jeanette Illidge is an accomplished Atlanta-based actress and singer and an award-winning narrator whose love for storytelling on stage led her to the wonderful world of audiobook narration. Jeanette has a sincere passion for bringing characters and their stories to audible life, and she has recorded books in several genres.

Christine Bollow is the Programs and Marketing Manager for Loyalty Bookstores and a Bookstagrammer @readingismagical. Her book recommendations have been featured in Buzzfeed Books, Book Marks, and Elle.com. She was highlighted by Books Forward as one of 10 Bookstagrammers to Follow for Asian & Pacific American Heritage Month and was a recent guest on The Stacks Podcast. Christine freelances as a quality control editor for audiobooks, is on the Booksellers Advisory Committee for the American Booksellers Association, and is passionate about amplifying books by marginalized voices, especially Filipinx authors.