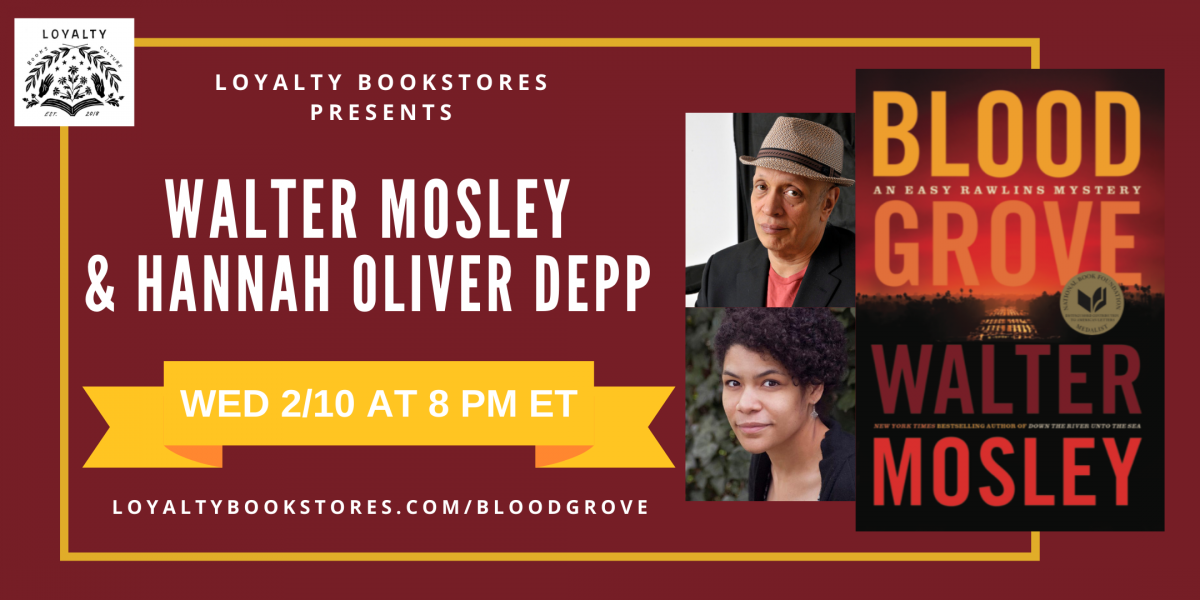 Loyalty is super psyched to host acclaimed author Walter Mosley for Blood Grove, the latest Easy Rawlins book. Walter will be in conversation with Loyalty's owner Hannah Oliver Depp, and we cannot wait! This event will be held digitally via Crowdcast. Click here to register for the event with a donation of any amount of your choice. Donations will go to Black Lives Matter DC. You can order the book on our website to be automatically registered for the event, and there will also be an option to get the book during the event. We will also have a limited amount of signed bookplates available!

"Master of craft and narrative" Walter Mosley returns with this crowning achievement in the Easy Rawlins saga, in which the iconic detective's loyalties are tested on the sun-soaked streets of Southern California (National Book Foundation)

It is 1969, and flames can be seen on the horizon, protest wafts like smoke though the thick air, and Easy Rawlins, the Black private detective whose small agency finally has its own office, gets a visit from a white Vietnam veteran. The young man comes to Easy with a story that makes little sense. He and his lover, a beautiful young woman, were attacked in a citrus grove at the city’s outskirts. He may have killed a man, and the woman and his dog are now missing. Inclined to turn down what sounds like nothing but trouble, Easy takes the case when he realizes how damaged the young vet is from his war experiences—the bond between veterans superseding all other considerations.

The veteran is not Easy’s only unlooked-for trouble. Easy’s adopted daughter Feather’s white uncle shows up uninvited, raising questions and unsettling the life Easy has long forged for the now young woman. Where Feather sees a family reunion, Easy suspects something else, something that will break his heart.

Blood Grove is a crackling, moody, and thrilling race through a California of hippies and tycoons, radicals and sociopaths, cops and grifters, both men and women. Easy will need the help of his friends—from the genius Jackson Blue to the dangerous Mouse Alexander, Fearless Jones, and Christmas Black—to make sense of a case that reveals the darkest impulses humans harbor.

Blood Grove is a novel of vast scope and intimate insight, and a soulful call for justice by any means necessary.

Walter Mosley is one of America's most celebrated and beloved writers. A Grand Master of the Mystery Writers of America, he has won numerous awards, including the Anisfield-Wolf Award, a Grammy, a PEN USA's Lifetime Achievement Award, and several NAACP Image Awards. His books have been translated into more than twenty languages. His short fiction has appeared in a wide array of publications, including The New Yorker, GQ, Esquire, Los Angeles Times Magazine, and Playboy, and his nonfiction has been published in The New York Times Book Review, The New York Times Magazine, Newsweek, and The Nation. He is the author of, most recently, Down the River unto the Sea. He lives in New York City.

Hannah Oliver Depp is the owner of Loyalty Bookstores in Petworth, DC and Silver Spring, MD. Loyalty serves all readers as a diverse, intersectional feminist bookstore and programming space. She holds a Masters in English from American University. Oliver Depp is a founding member of the American Bookselling Association Committee on Diversity, Equity, and Inclusion and serves on the boards of Bookshop.org and the New Atlantic Independent Bookselller’s Assocation.