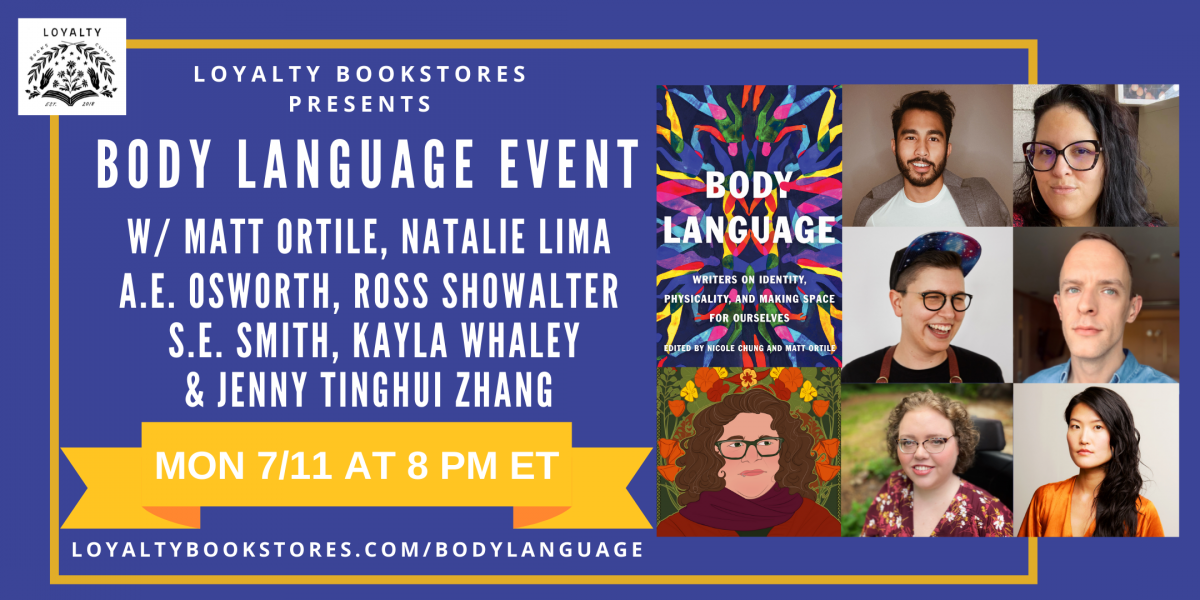 Loyalty can't wait to celebrate Body Language for a pre-publication virtual event with co-editor Matt Ortile and contributors Natalie Lima, A.E. Osworth, Ross Showalter, s.e. smith, Kayla Whaley, and Jenny Tinghui Zhang! This event will be held digitally via Crowdcast. Click here to register for the event with a donation of any amount of your choice. You can also order the book below to be added to the event's registration list. Donations will go to Partners in Abortion Care. There will also be an option to snag the book during the event.

A kaleidoscopic anthology of essays published by Catapult magazine about the stories our bodies tell, and how we move within—and against—expectations of race, gender, health, and ability

Bodies are serious, irreverent, sexy, fragile, strong, political, and inseparable from our experiences and identities as human beings. Pushing the dialogue and confronting monolithic myths, this collection of essays tackles topics like weight, disability, desire, fertility, illness, and the embodied experience of race in deep, challenging ways.

Selected from the archives of Catapult magazine, the essays in Body Language affirm and challenge the personal and political conversations around human bodies from the perspectives of thirty writers diverse in race, age, gender, size, sexuality, health, ability, geography, and class—a brilliant group probing and speaking their own truths about their bodies and identities, refusing to submit to others’ expectations about how their bodies should look, function, and behave.

Covering a wide range of experiences—from art modeling as a Black woman to nostalgia for a brutalizing high school sport, from the frightening upheaval of cancer diagnoses to the small beauties of funeral sex—this collection is intelligent, sensitive, and unflinchingly candid. Through the power of personal narratives, as told by writers at all stages of their careers, Body Language reflects the many ways in which we understand and inhabit our bodies.

Matt Ortile is the author of the essay collection The Groom Will Keep His Name and the co-editor of the nonfiction anthology Body Language. He is also the executive editor of Catapult magazine and was previously the founding editor of BuzzFeed Philippines. He has received fellowships from the Sewanee Writers’ Conference and MacDowell, has taught writing workshops at Kundiman and Catapult, and has written for Esquire, Vogue, Condé Nast Traveler, Out magazine, and BuzzFeed News, among others. He is a graduate of Vassar College, which means he now lives in Brooklyn.

Natalie Lima is a Cuban-Puerto Rican writer and a graduate of the MFA program at the University of Arizona. Her essays and fiction have been published or are forthcoming in Longreads, Guernica, Brevity, The Offing, Catapult, Sex and the Single Girl (Harper Perennial, 2022), and elsewhere. Her writing has been honored in Best Small Fictions (2020), and noted twice in Best American Essays (2019 and 2020). Natalie has received fellowships from PEN America Emerging Voices, Bread Loaf Writers' Conference, the Tin House Workshops, the VONA/Voices Workshop, the Virginia G. Piper Center for Creative Writing, and a residency from Hedgebrook. As of fall of 2022, Natalie will be joining the faculty at Butler University as an Assistant Professor in the Department of English.

A.E. Osworth is a transgender novelist and, as of Fall 2022, Visiting Assistant Professor at The Ohio State University. Their debut, WE ARE WATCHING ELIZA BRIGHT (Grand Central Publishing 2021), was a finalist for the Oregon Book Award and long listed for The Center for Fiction’s First Novel Prize, the Brooklyn Public Library Literary Prize, and The Tournament of Books. They also have a decade-long career writing nonfiction on the internet, which includes a stint as Geekery Editor for Autostraddle and as a columnist for Catapult. You can also find their work on Guernica, Electric Literature and Quartz, among others.

s.e. smith is a Northern California-based journalist, essayist, and editor. smith's work on disability, culture, and social attitudes has appeared in publications such as the Washington Post, Time, The Guardian, Rolling Stone, Esquire, and Vice, in addition to anthologies, most recently Body Language. They received a National Magazine Award in 2020 for their work in Catapult.

Ross Showalter’s stories, essays, and criticism have appeared in The New York Times, Electric Literature, The Rumpus, Catapult, Literary Hub, Black Warrior Review, and elsewhere. He teaches creative writing in UCLA Extension's Writers’ Program.s.e. smith is a Northern California-based journalist, essayist, and editor. smith's work on disability, culture, and social attitudes has appeared in publications such as the Washington Post, Time, The Guardian, Rolling Stone, Esquire, and Vice, in addition to anthologies, most recently Body Language. They received a National Magazine Award in 2020 for their work in Catapult.

Kayla Whaley's essays and short fiction have appeared in numerous anthologies, including Unbroken, Vampires Never Get Old, Game On, and Allies, as well as in publications like Bustle, Catapult, and Michigan Quarterly Review. She holds an MFA in creative nonfiction from the University of Tampa, and is a graduate of the Clarion Writers' Workshop. Kayla lives outside Atlanta, Georgia where she drinks too much coffee and buys too many books.

Jenny Tinghui Zhang is a Chinese American writer and author of the novel Four Treasures of the Sky. Her fiction and nonfiction have appeared in Apogee, Ninth Letter, Passages North, The Rumpus, HuffPost, The Cut, Catapult, and elsewhere. She holds an MFA from the University of Wyoming and has received support from Kundiman, Tin House, and VONA/Voices. She was born in Changchun, China, and grew up in Austin, Texas, where she currently lives.

Body Language: Writers on Identity, Physicality, and Making Space for Ourselves (Paperback)

The Groom Will Keep His Name: And Other Vows I've Made About Race, Resistance, and Romance (Paperback)

We Are Watching Eliza Bright (Paperback)

Four Treasures of the Sky: A Novel (Hardcover)