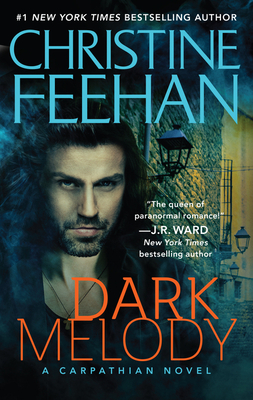 By Christine Feehan
Available to order- email info@loyaltybookstores.com
Not In Store - Available to Special Order

They were masters of the darkness, searching through eternity for a mistress of the light...

Lead guitarist of the Dark Troubadours, Dayan was renowned for his mesmerizing performances. His melodies stilled crowds, beckoned, seduced, tempted. And always, he called to her. His lover. His lifemate. He called to her to complete him. To give him the emotions that had faded from his existence, leaving him an empty shell of growing darkness. Save me. Come to me.

Corinne Wentworth stood at the vortex of a gathering storm. Pursued by the same fanatics who'd murdered her husband, she was risking her life by keeping more than on secret. Fragile, delicate, vulnerable, she had an indomitable faith that made her fiery surrender to Dayan all the more powerful. This was the e woman whose loss would destroy him, even as her love promised to heal his soul.

Christine Feehan has had more than forty novels published, including four series which have hit #1 on the New York Times bestseller list. She is pleased to have made it onto numerous other bestseller lists as well, including Publishers Weekly, USA Today, Washington Post, BookScan, B. Dalton, Amazon, Barnes & Noble, Waldenbooks, Ingram, Borders, Rhapsody Book Club, and Walmart. In addition to being a nominee for the Romance Writers of America’s RITA® Award, she has received many honors throughout her career, including a Career Achievement Award from Romantic Times and the Borders 2008 Lifetime Achievement Award.

“The queen of paranormal romance! The one who started it all! I love everything she does.”
— New York Times bestselling author J.R. Ward

“Feehan has a knack for bringing vampiric Carpathians to vivid, virile life in her Dark Carpathian novels.”
— Publishers Weekly

“After Bram Stoker, Anne Rice, and Joss Whedon (who created the venerated Buffy the Vampire Slayer), Feehan is the person most credited with popularizing the neck gripper.”
— Time magazine

“[A] compelling and spectacular series. The amazingly prolific author’s ability to create captivating and adrenaline-raising worlds is unsurpassed.”
— Romantic Times