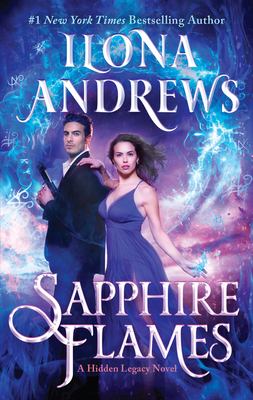 This is book number 4 in the Hidden Legacy series.

In a world where magic is the key to power and wealth, Catalina Baylor is a Prime, the highest rank of magic user, and the Head of her House. Catalina has always been afraid to use her unique powers, but when her friend’s mother and sister are murdered, Catalina risks her reputation and safety to unravel the mystery.

But behind the scenes powerful forces are at work, and one of them is Alessandro Sagredo, the Italian Prime who was once Catalina’s teenage crush. Dangerous and unpredictable, Alessandro’s true motives are unclear, but he’s drawn to Catalina like a moth to a flame.

To help her friend, Catalina must test the limits of her extraordinary powers, but doing so may cost her both her House–and her heart.

“Ilona Andrews” is the pseudonym for a husband-and-wife writing team. Ilona is a native-born Russian, and Gordon is a former communications sergeant in the U.S. Army. Contrary to popular belief, Gordon was never an intelligence officer with a license to kill, and Ilona was never the mysterious Russian spy who seduced him. They met in college, in English Composition 101, where Ilona got a better grade. (Gordon is still sore about that.) They have co-authored four New York Times and USA Today bestselling series: the urban fantasy of Kate Daniels, rustic fantasy of the Edge, paranormal romance of Hidden Legacy, and Innkeeper Chronicles. They live in Texas with their two children and many dogs and cats.

“Andrews’s endlessly inventive action scenes are chock full of strange magic, and Catalina and Alessandro’s sexy sparring is a delight. Fans and new readers alike will enjoy the wit and worldbuilding and be thrilled to have this exciting new heroine to root for.”  — Publishers Weekly