Would I Lie to the Duke: The Union of the Rakes (Mass Market) 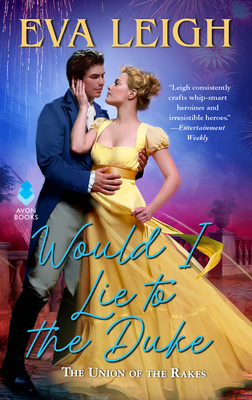 When an ambitious entrepreneur pretends to be a lady of means, she catches the eye—and heart—of a duke...

Jessica McGale’s family business desperately needs investors and she’s determined to succeed at any cost. But she knows London’s elite will never look twice at a humble farm girl like herself. Posing as “Lady Whitfield,” however, places her in the orbit of wealthy, powerful people—most notably the Duke of Rotherby. His influence and support could save her company, but Jess never expected the effect he’d have on her.

Society thinks Noel is a notorious, carefree duke who dabbles in investments, but there’s a side to him that only his closest friends see. When he crosses paths with Lady Whitfield at a business bazaar, his world tilts on its axis. She’s brilliant and compelling, and brings him to his knees like no woman has before. Trust is difficult for Noel, but Jess makes him believe anything is possible. . .

As time ticks down on her Cinderella scheme, the thought of achieving her goal at Noel’s expense breaks Jess’s heart. He doesn’t just want her now, he wants her forever. But will her secret end their future before it begins?

Meet the Union of the Rakes—Eva Leigh's latest Regency romance series inspired by the Breakfast Club and other classic 80s films!

Eva Leigh is a USA Today bestselling romance author who has always loved historical romance. She writes novels chock-full of determined women and men who are here for it. She enjoys baking, spending too much time on the Internet, and listening to music from the '80s. Eva and her husband live in Central California.

Visit her on the web at http://evaleighauthor.com

"My Fake Rake is a feast of female empowerment, positive friendships, feel-good moments, and social satire. And as the first book in a series, it builds a delicious world you'll want to come back to — hopefully because the delightful supporting characters will get their own stories next." — NPR for My Fake Rake

“divinely charming... Grace and Sebastian are the two of the most glorious dummies ever to grace the pages of a romance novel... The makeover trope is one of the more tired and problematic of the rom-com genre, but Leigh ingeniously turns it on its head, swapping the genders and making Sebastian’s transformation more about social commentary than anything else... our love for these two romantic dunces and their satirical, slow-burn, sexy ruse is nothing but genuine.” — Entertainment Weekly for My Fake Rake

“A jolt of electricity, a blast of fresh air—everything delightful and exciting you could want it to be.”  — New York Times Book Review

"This superbly entertaining, perfectly executed Regency-set love story is not only dazzlingly witty and intensely sexy; it is also a sweetly crafted love letter about the power of learning, literature, and lifelong friendships."  — Booklist (starred review)

"Grace and Seb are delightful together, and Seb is a breath of non-alpha-hero fresh air... satisfying for readers of Courtney Milan and Tessa Dare. A sweet faux suitor romance between two scientist friends who find a new passion in one another."  — Kirkus Reviews

"In this first book of her new “Union of the Rakes” series, Leigh adopts the fake dating trope to the Regency Era in a wildly fun and entertaining way, introducing characters who are sure to delight fans of this beloved genre." — Library Journal

"charming... The plot is as well developed as the lovers’ growing feelings. Readers will delight in this heartfelt, swoon-worthy tale."
— Publishers Weekly (starred review)

"Eva Leigh puts inspiring, forthright female characters at the forefront of her delectable romances... with down-to-earth characters and an enthralling friends-to-lovers storyline, My Fake Rake is a hard one to put down." — BookPage.com

“This book is so good! Dorks + rake makeover + kissing = DELICIOUSNESS. Run to read it!!”  — Joanna Shupe, author of The Prince of Broadway on My Fake Rake

"This book is totally charming." — Cat Sebastian, author of A Delicate Deception on My Fake Rake

"Complex, witty characters with strong bonds and big hearts enliven the seductive second Union of the Rakes romance... Leigh makes a strong case for their compatibility as Noel learns to open his heart and Jessica learns her own lesson about trust. Readers will delight in this fun, fresh Regency."  — Publishers Weekly

"There are well-rounded characters, drama and some impish fun—one man pitches what sounds very much like an impractical version of Twitter—but the satisfying sense of female empowerment makes this a standout."  — Bookpage (Starred Review)

"A duke who has no problem taking a more submissive role and an intelligent woman determined not to fail make an exquisite match in this second spicy, delectable tale... Regency fans will savor and want more." — Library Journal (starred review)

"Everything I look for in a historical romance and much more. The characters in WOULD I LIE TO THE DUKE are realistically flawed but equally entertaining and engaging. This story never lets you down."  — Fresh Fiction