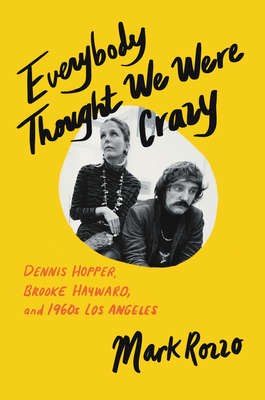 The stylish, wild story of the marriage of Dennis Hopper and Brooke Hayward—a tale of love, art, Hollywood, and heartbreak

“Those years in the sixties when I was married to Dennis were the most wonderful and awful of my life.” —Brooke Hayward

Los Angeles in the 1960s: riots in Watts and on the Sunset Strip, wild weekends in Malibu, late nights at The Daisy discotheque, openings at the Ferus Gallery, and the convergence of pop art, rock and roll, and the New Hollywood. At the center of it all, one inspired, improbable, and highly combustible couple—Dennis Hopper and Brooke Hayward—lived out the emblematic love story of ’60s L.A.

The home these two glamorous young actors created for themselves and their family at 1712 North Crescent Heights Boulevard in the Hollywood Hills became the era’s unofficial living room, a kaleidoscopic realm—“furnished like an amusement park,” Andy Warhol said—that made an impact on anyone who ever stepped into it. Hopper and Hayward, vanguard collectors of contemporary art, packed the place with pop masterpieces by the likes of Roy Lichtenstein, Ed Ruscha, and Warhol, and welcomed a who’s who of visitors, from Jane Fonda to Jasper Johns, Joan Didion to Tina Turner, Hells Angels to Black Panthers. In this house, everything that defined the 1960s went down: the fun, the decadence, the radical politics, and, ultimately, the danger and instability that Hopper explored in the project that made his career, became the cinematic symbol of the period, and blew their union apart—Easy Rider.

Everybody Thought We Were Crazy is at once a fascinating account of the Hopper and Hayward union and a deeply researched, panoramic cultural history. It’s the intimate saga of one couple whose own rise and fall—from youthful creative flowering to disorder and chaos—mirrors the very shape of the decade.

Mark Rozzo is a contributing editor at Vanity Fair . He has also written for the Los Angeles Times, the New Yorker, the New York Times, Esquire, Vogue, the Wall Street Journal, the Oxford American, the Washington Post, and many others. He teaches nonfiction writing at Columbia University.

"A brief but incandescent cultural moment. . . . Rozzo succeeds, juggling names and events with the skill of someone intimately familiar with the turf. . . . Everybody Thought We Were Crazy is an exceptionally well-researched and well-written book . . . [about the] unlikely, outrageous, and creatively dazzling union of a madman and a queen." — Wall Street Journal

"A vibrant depiction of how some of the most substantial creative figures of the 20th century jostled against and inspired one another. . . . The triumph of Rozzo’s book is that one ultimately feels this sense of possibility at its full extension. . . . To feel all this potential before it evaporates, and before this improbable, fleetingly beautiful union . . . goes shooting down in flames." — The Atlantic

"Everybody Thought We Were Crazy is at once a biography of a wildly creative and inventive couple and a landmark and long-overdue cultural history of a scene that made a city. . . . [Rozzo's book] is that rare thing: A thrilling read that brings us inside a scandalously under-reported time and place." — Vogue

"Everybody Thought We Were Crazy serves as a portrait not only of a marriage but of a critical American artistic awakening. . . . Rozzo paints a neon picture of [Hayward and Hopper's] milieu. . . . a life and time in Technicolor." — Vanity Fair

"Wonderful. . . . [A] rollicking tale. . . . By centering his book on the juxtaposition of opposing worlds—of Dennis Hopper and Brooke Hayward; of an America seemingly poised to run on flower power and an America that can’t quite manage a civil Thanksgiving meal—Rozzo makes each world, each character and each reality both shocking and believable, both ridiculous and sublime." — Washington Post

"The glamour and the underbelly of the hippest party house in 1960s L.A. . . . Mark Rozzo brings the lost scene to life in Everybody Thought We Were Crazy." — Los Angeles Times

"Armed with Hayward’s never-before-published memoirs and scores of in-depth interviews, Rozzo paints a fascinating if dark portrait not just of Hopper and Hayward but the culture they helped reshape." — Milwaukee Journal Sentinel

"Rozzo has done an excellent job of bringing back the excitement of pop art, rock & roll and a California decade that was fueled by drink and drugs. Everybody Thought We were Crazy is a salute to those years." — Denver Post

"Mark Rozzo's deeply researched, beautifully written, and endlessly fascinating exploration of the couple and the time they spend together is an incredible portrait of a singular time and two people who helped define it." — Town & Country

“A scintillating romance plays out against the febrile backdrop of 1960s L.A. in [this] luminous debut. . . . [Rozzo] delivers a captivating drama of clashing egos and artistic struggles that captures the oft-volatile vicissitudes of love.” — Publishers Weekly

"[An] era-defining love story set against the backdrop of Hollywood in the sixties. . . . The book paints a detailed picture of the iconic Hopper and his relationship with Hayward." — Booklist

"Rozzo delves deep into [Dennis Hopper's and Brooke Hayward's] lives, making a strong case for their enduring cultural influence. Telling all the right tales, this story of 'the coolest kids in Hollywood' proves their artistic significance." — Kirkus Reviews

"Drawing on diligent research and an excellent array of interviews, Rozzo brings 1960s L.A. to life in all its joy, creativity, and chaos. Rozzo documents a roller-coaster ride of big ideas, big failures, lasting successes, and lost projects. Recommended for anyone interested in the culture of the 1960s."  — Library Journal

“Turns out Brooke Hayward and Dennis Hopper were the Gerald and Sara Murphy of Los Angeles in the 1960s, as Mark Rozzo vividly demonstrates in this utterly compelling portrait of an unlikely marriage which encompassed the creative fecundity and cultural upheaval of that special time and place.” — Jay McInerney, author of Bright, Precious Days

“Mark Rozzo’s portrait of the lives of Dennis Hopper and Brooke Hayward is a delicious peek into the private world of two wildly creative (if volatile) tastemakers whose galaxy of friends and collaborators redefined modern art and pop culture forever. In tracing the couple’s peripatetic footsteps, Rozzo lands us directly into the white-hot cultural moment when Pop Art, Hollywood, and a nascent ’60s bohemia converged, yielding up revelations and secret histories on virtually every page. A breathtaking achievement in research written in the cool and confident style of an expert storyteller.”
— Joe Hagan, author of Sticky Fingers

“A fascinating couple, in a great city, at a thrilling moment: Dennis Hopper and Brooke Hayward, in Los Angeles, in the 1960s — that’s the wonderful topic Mark Rozzo has taken on in his new book. He lets us see the amazing creativity that came about because of that coincidence of people, place, and era. He also lets us see the pain that underlay the art and that tore Hopper and Hayward — and the decade — apart.” — Blake Gopnik, author of Warhol

“If there was one couple who epitomized the craziness and creativity of L.A. in the 1960s, it was Dennis Hopper and Brooke Hayward. Mark Rozzo tells the story of their relationship, and their era, in this can’t-put-it-down bio-history. Hopper and Hayward’s home was the epicenter of the art, movie, and music scenes where you were as likely to run into Andy Warhol as you were Jack Nicholson or Roger McGuinn. Compulsively readable.” — Peter Biskind, author of Easy Riders, Raging Bulls

“Mark Rozzo, an electric and virtuoso storyteller, resurrects the relationship between icons Dennis Hopper and Brooke Hayward to dissect their marriage and its fallout, and takes many fabulous detours along the way with the artists and stars who crossed paths with Hopper and Hayward.” — Gay Talese, author of The Kingdom and the Power