Beauty Tempts the Beast: A Sins for All Seasons Novel (Mass Market) 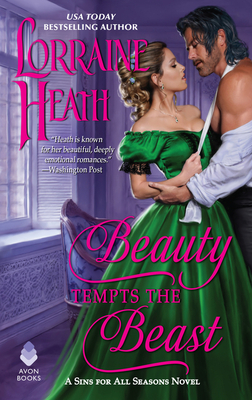 This is book number 6 in the Sins for All Seasons series.

Lorraine Heath ends her bestselling Sins for All Seasons series with the hero readers have been waiting for!

She wants lessons in seduction

Althea Stanwick was a perfect lady destined to marry a wealthy lord, until betrayal left her family penniless. Though she’s lost friends, fortune, and respectability, Althea has gained a scandalous plan. If she can learn to seduce, she can obtain power over men and return to Society on her terms. She even has the perfect teacher in mind, a man whose sense of honor and dark good looks belie his nickname: Beast.

Benedict Trewlove may not know his parentage but he knows where he belongs—on the dark side of London, offering protection wherever it’s needed. Yet no woman has ever made such an outrageous request as this mysterious beauty. Althea is out of place amongst vice and sin, even if she offers a wicked temptation he can’t resist. But as the truth of his origin emerges at last, it will take a fierce, wild love to overcome their pasts.

"Heath concludes her Sin for All Seasons series with a true treat of a Victorian romance...[she] may have saved the best for last." — Publishers Weekly (starred review)

"This Sins for All Seasons series finale is full of heart." — Kirkus Reviews