The Duke Gets Even: A Novel (The Fifth Avenue Rebels #4) (Mass Market) 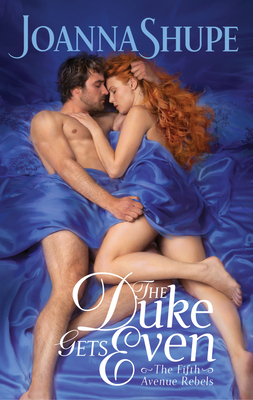 This is book number 4 in the The Fifth Avenue Rebels series.

By beloved USA Today bestselling author Joanna Shupe, the fourth installment in the Fifth Avenue Rebels series about a secret affair between a free-spirited heiress and an uptight duke which turns more passionate than either could have imagined.

A duke in dire straits.

To escape the shackles of marriage, Nellie Young purposely ruined her reputation a long time ago. Now she dedicates herself to hedonistic pleasures only, like kissing a handsome stranger in the ocean under the moonlight...

To save his estate, the proper Duke of Lockwood must marry the perfect bride—wealthy, with an unblemished reputation. While in New York he’s the perfect gentleman, and no one knows he’s suppressing his darkest desires. The last thing he needs is another scandal.

Except Nellie sees through Lockwood’s charade, straight to the real man underneath. This uptight duke is far more than he lets on, and she can’t resist him. Their secret affair turns scorching, far more than either expected. And when his beautiful rebel finds an unconventional cause, Lockwood has to decide if he’s willing to sacrifice everything to keep her.

Joanna Shupe has always loved history, ever since she saw her first Schoolhouse Rock cartoon. In 2013, she won Romance Writers of America's prestigious Golden Heart® Award for Best Historical. Since then, her books have appeared on numerous yearly &#8220best of” lists, including Publishers Weekly, The Washington Post, Kirkus Reviews, Kobo and BookPage. She lives in New Jersey with her two spirited daughters and dashing husband.  >

"Shupe (The Bride Goes Rogue) shines again, offering what may be the best entry as she ties up what was already an excellent series with a steamy story that showcases well-written characters readers have come to love." — Library Journal (starred review)

“Shupe’s well-loved Fifth Avenue Rebels series returns with a very saucy friends-with-benefits story. As ever, her command of historical details enlivens the story as much as her command of intimate ones… The Mrs. Astor of Gilded Age romances provides another smart and sexy read.” — Kirkus Reviews (starred review) on The Bride Goes Rogue

“Shupe (the Uptown Girls series) opens her Fifth Avenue Rebels series with this effortlessly diverting Gilded Age romance... [Harrison and Maddie’s] sexual chemistry and dynamic banter, especially during intimate moments, convey an alluring blend of love and playfulness. This character-driven historical romance is sure to delight.”  — Publishers Weekly on The Heiress Hunt

“Swoon! With The Rogue of Fifth Avenue, Shupe continues to build on the sterling legacy she’s building for herself as a gifted weaver of glittering Gilded Age tales (complete with lots of nod to real historical figures), while also deepening the contemporary resonance of her themes.” — Entertainment Weekly