Reflections on the Revolution in France (Paperback) 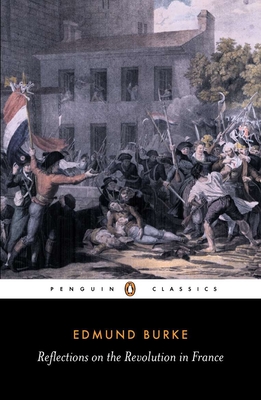 ‘To make a revolution is to subvert the ancient state of our country; and no common reasons are called for to justify so violent a proceeding’

Burke’s seminal work was written during the early months of the French Revolution, and it predicted with uncanny accuracy many of its worst excesses, including the Reign of Terror. A scathing attack on the revolution’s attitudes to existing institutions, property and religion, it makes a cogent case for upholding inherited rights and established customs, argues for piecemeal reform rather than revolutionary change – and deplores the influence Burke feared the revolution might have in Britain. Reflections on the Revolution in France is now widely regarded as a classic statement of conservative political thought, and is one of the eighteenth century’s great works of political rhetoric.

Conor Cruise O’Brien’s introduction examines the contemporary political situation in England and Ireland and its influence on Burke’s point of view. He highlights Burke’s brilliant grasp of social and political forces and discusses why the book has remained so significant for over two centuries.

Edmund Burke (1729-1797) was born in Dublin and educated at Trinity College. A lifelong member of Parliament, Burke was the author of A Philosophical Enquiry into the Sublime and Beautiful, A Vindication of Natural Society, and Reflections on the Revolution in France.