Taggerung: A Tale from Redwall (Paperback) 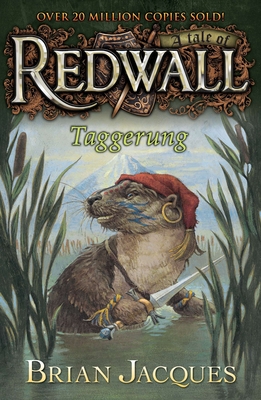 This is book number 14 in the Redwall series.

The Redwall series is soon to be a Netflix original movie!

Years ago, the vermin clan of Sawney Rath kidnapped one of Redwall's own-a baby otter, destined to become their "Taggerung," a warrior hero of ancient legend. But as young Tagg grows, he rebels against his destiny. The young otter journeys in search of his birthplace, a member of Sawney's clan always near, out to destroy the deserter. With the feisty mouse Nimbalo, Tagg fends off the avenging vermin, but can he find his way back to the Redwall family from whom he was separated so long ago? Here is all of the excitement and adventure a Redwall fan could wish for!

Brian Jacques was born in Liverpool, England on June 15th, 1939. Along with forty percent of the population of Liverpool, his ancestral roots are in Ireland. A well-known radio personality in his native Liverpool--as well as an actor, stand-up comic, and playwright--Brian was the host of "Jakestown" on BBC Radio Merseyside. Ever the performer, Jacques applied his acting and entertainment background to his lively presentations to legions of young fans at schools across the United States and England.

His interest in adventure stories began at an early age with reading the books of: Daniel Defoe, Sir Henry Rider Haggard, Arthur Conan Doyle, Sir Thomas Malory, Robert Michael Ballantyne, Robert Louis Stevenson, Edgar Rice Burroughs, and Kenneth Grahame. He attended St. John's School, an inner city school that had its playground on the roof. On his first day at St. John's, at the age of ten, he had an experience that marked his potential as a writer. When given an assignment of writing a story about animals, he wrote about the bird that cleaned a crocodile's teeth. The teacher could not, and would not, believe that a ten year old could write that well. When young Brian refused to falsely say that he had copied the story, he was caned as "a liar". He had always loved to write, but it was only then, that he realized that he had a talent for writing.

Some teachers at St. John's proved to be good role models. This interest in poetry extended to Wordsworth, Tennyson, and Goldsmith. It was also at St. John's that Brian met a teacher, Alan Durband (who also taught two Beatles, Paul McCartney and George Harrison), who, more than thirty years later would bring about a major change in his life.

After Brian finished school at fifteen, he set out to find adventure as a merchant seaman. He travelled to many far away ports, including New York, Valparaiso, San Francisco, and Yokohama. Tiring of the lonely life of a sailor, he returned to Liverpool where he worked as a railway fireman, a longshoreman, a long-distance truck driver, a bus driver, a boxer, a bobby (Police Constable 216D), a postmaster, and a stand-up comic.