Postwar: A History of Europe Since 1945 (Paperback) 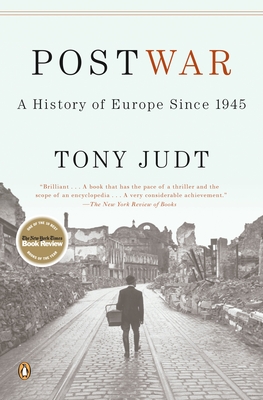 “Magisterial . . . It is, without a doubt, the most comprehensive, authoritative, and yes, readable postwar history.” —The Boston Globe

Almost a decade in the making, this much-anticipated grand history of postwar Europe from one of the world's most esteemed historians and intellectuals is a singular achievement. Postwar is the first modern history that covers all of Europe, both east and west, drawing on research in six languages to sweep readers through thirty-four nations and sixty years of political and cultural change-all in one integrated, enthralling narrative. Both intellectually ambitious and compelling to read, thrilling in its scope and delightful in its small details, Postwar is a rare joy.

Judt's book, Ill Fares the Land, republished in 2021 featuring a new preface by bestselling author of Between the World and Me and The Water Dancer, Ta-Nehisi Coates.

Tony Judt was the Erich Maria Remarque Professor of European Studies at New York University, as well as the founder and director of the Remarque Institute, dedicated to creating an ongoing conversation between Europe and the United States. He was educated at King’s College, Cambridge, and the École Normale Supérieure, Paris, and also taught at Cambridge, Oxford, and Berkeley. Professor Judt was a frequent contributor to The New York Review of Books, The Times Literary Supplement, The New Republic, The New York Times, and many journals across Europe and the United States. He is the author or editor of fifteen books, including Thinking the Twentieth Century, The Memory Chalet, Ill Fares the Land, Reappraisals: Reflections on the Forgotten Twentieth Century, and Postwar: A History of Europe Since 1945, which was one of The New York Times Book Review’s Ten Best Books of 2005, the winner of the Council on Foreign Relations Arthur Ross Book Award, and a finalist for the Pulitzer Prize. He died in August 2010 at the age of sixty-two.

“Judt's massive, learned, brilliantly detailed account of Europe's recovery from the wreckage of World War II presents a whole continent in panorama even as it sets off detonations on almost every page.” —The New York Times Book Review

“Remarkable . . . The writing is vivid; the coverage-of little countries as well as of great ones-is virtually superhuman; and above all, the book is smart. Every page contains unexpected data, or a fresh observation, or a familar observation freshly turned.” —Louis Menand, The New Yorker

“Magisterial . . . It is, without a doubt, the most comprehensive, authoritative, and yes, readable postwar history.” —The Boston Globe

“Brilliant . . . A book that has the pace of a thriller and the scope of an encyclopedia . . . A very considerable achievement.” —The New York Review of Books

“Not likely to be surpassed for many years. . . . This is history writing at its best.” —Publishers Weekly (starred review)