The Fall of France: The Nazi Invasion of 1940 (Making of the Modern World) (Paperback) 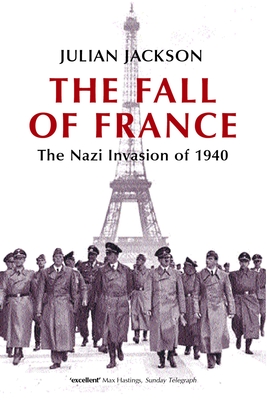 By Julian Jackson
Available to order- email info@loyaltybookstores.com
Not In Store - Available to Special Order

The Fall of France in 1940 is one of the pivotal moments of the twentieth century. If the German invasion of France had failed, it is arguable that the war might have ended right there. But the French suffered instead a dramatic and humiliating defeat, a loss that ultimately drew the whole
world into war. This exciting new book by Julian Jackson, a leading historian of twentieth-century France, charts the breathtakingly rapid events that led to the defeat and surrender of one of the greatest bastions of the Western Allies. Using eyewitness accounts, memoirs, and diaries to bring the story to life,
Jackson not only recreates the intense atmosphere of the six weeks in May and June leading up to the establishment of the Vichy regime, but he also unravels the historical evidence to produce a fresh answer to the perennial question--was the fall of France inevitable. Jackson's vivid narrative
explores the errors of France's military leaders, her inability to create stronger alliances, the political infighting, the lack of morale, even the decadence of the inter-war years. He debunks the vast superiority of the German army, revealing that the more experienced French troops did well in
battle against the Germans. Perhaps more than anything else, the cause of the defeat was the failure of the French to pinpoint where the main thrust of the German army would come, a failure that led them to put their best soldiers up against a feint, while their worst troops faced the heart of the
German war machine. An engaging and authoritative narrative, The Fall of France illuminates six weeks that changed the course of twentieth-century history.

Julian Jackson is Professor of French History at the University of Swansea and the author of several books on twentieth-century France, including France: The Dark Years 1940-1944, which was a finalist for a Los Angeles Times Book Award.