The Glory and the Sorrow: A Parisian and His World in the Age of the French Revolution (Hardcover) 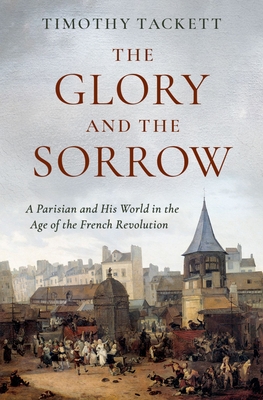 By Timothy Tackett
Available to order- email info@loyaltybookstores.com
Not In Store - Available to Special Order

An intimate history of an ordinary Parisian citizen and his neighbors that reflects on the origins and radicalization of the French Revolution. What was it like to live through one of the most transformational periods in world history? In The Glory and the Sorrow, eminent historian Timothy Tackett answers this question through a masterful recreation of the world of Adrien Colson, a minor lawyer who lived in Paris at the end of the Old
Regime and during the first eight years of the French Revolution. Based on over a thousand letters written by Colson to his closest friend, this book vividly narrates everyday life for an ordinary citizen during extraordinary times, as well as the life of a neighborhood on a small street in central Paris. It explores the real, day-to-day experience of a
revolution: not only the thrill, the joy, and the enthusiasm, but also the uncertainty, the confusion, the anxiety, and the disappointments. While Colson reported on major events such as the storming of the Bastille and the King's flight to Varennes, his correspondence underscores the extent to
which the great majority of Parisians--and no doubt of the French population more generally--in no way anticipated the Revolution; the incessant circulation and power of rumors of impending disasters in Paris, not just in the summer of 1789 but continually from the autumn of 1789 throughout the
Revolutionary decade; and how this affected popular psychology and behavior. In doing so, this account demonstrates how a Parisian and his neighbors were radicalized over the course of the Revolution. An evocative account of Colson's time and place, The Glory and the Sorrow is a compelling microhistory of Revolutionary France.

Timothy Tackett is Professor of History Emeritus at the University of California, Irvine. He is the author of many books, including The Coming of the Terror in the French Revolution; When the King Took Flight; Becoming a Revolutionary: The Deputies of the French National Assembly and the Origins ofa Revolutionary Culture; and Religion, Revolution, and Regional Culture in Eighteenth-Century France.