Reflections on the Revolution in France (Rethinking the Western Tradition) (Paperback) 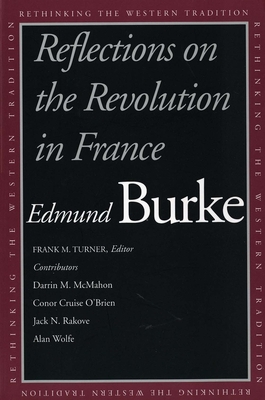 The most enduring work of its time, Reflections on the Revolution in France waswritten in 1790 and has remained in print ever since. Edmund Burke’s analysis of revolutionary change established him as the chief framer of modern European conservative political thought. This outstanding new edition of the Reflections presentsBurke’s famous text along with a historical introduction by Frank M. Turner and four lively critical essays by leading scholars. The volume sets the Reflections in the context of Western political thought, highlights its ongoing relevance to contemporary debates, and provides abundant critical notes, a glossary, and a glossary-index to ensure its accessibility. Contributors to the book examine various provocative aspects of Burke’s thought. Conor Cruise O’Brien explores Burke’s hostility to “theory,” Darrin McMahon considers Burke’s characterization of the French Enlightenment, Jack Rakove contrasts the views of Burke and American constitutional framers on the process of drawing up constitutions, and Alan Wolfe investigates Burke, the social sciences, and liberal democracy.

Frank M. Turner is John Hay Whitney Professor of History, Yale University. Conor Cruise O’Brien is the author of The Great Melody: A Thematic Biography and Commented Anthology of Edmund Burke. Darrin M. McMahon is the author of Enemies of the Enlightenment: The French Counter-Enlightenment and the Making of Modernity. Jack N. Rakove of Stanford University was awarded the Pulitzer Prize for his book Original Meanings: Politics and Ideas in the Making of the Constitution. Alan Wolfe is director of the Boisi Center for Religion and American Public Life at Boston College and the author of Moral Freedom: The Search for Virtue in a World of Choice.