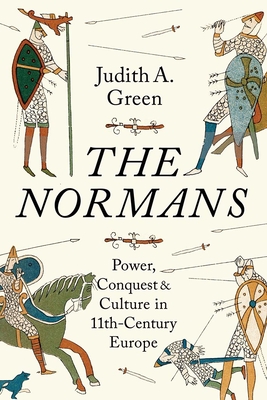 By Judith A. Green
Available to order- email info@loyaltybookstores.com
Not In Store - Available to Special Order

In the eleventh century the climate was improving, population was growing, and people were on the move. The Norman dynasty ranged across Europe, led by men who achieved lasting fame like William the Conqueror and Robert Guiscard. These figures cultivated an image of unstoppable Norman success and their victories make for a great story, but how much of it is true?

In this insightful history, Judith Green challenges old certainties and explores the reality of Norman life across the continent. There were many soldiers of fortune, but their successes were down to timing, good luck, and ruthless leadership. Green shows the Normans’ profound impact, from drastic change in England to laying the foundations for unification in Sicily, to their contribution to the First Crusade. Going beyond the familiar, she looks at personal dynastic relationships and the important part women played in what at first sight seems a resolutely masculine world.

Judith A. Green is professor emeritus of history at the University of Edinburgh. Her many distinguished works include Henry I and The Aristocracy of Norman England.

“Green is intent on cutting through the chainmail of hype. This is a very serious book that’s bound to delight her academic colleagues.”—Gerard DeGroot, The Times

“This is a faultless study...Throughout, Green tries to pin down the secret of the Normans’ success, but she finds broad conclusions hard to reach because, like many of the most capable conquerors before them, the Normans were chameleons. Wherever they went, they came, they
saw, they conquered, then they melted into the background.”—Dan Jones, The Sunday Times

“Power is key to explain the history of the Normans in eleventh-century Europe, so Judith Green argues in her magisterial new book. It offers a compelling analysis of the distinctiveness of each power grab in England and across the Mediterranean.”—Professor Elisabeth van Houts, Emmanuel College, University of Cambridge


“An ambitious and modern retelling of the medieval Normans and their culture. Green deploys her encyclopedic knowledge of medieval sources and modern scholarship to challenge existing perceptions on who the Normans thought they were, the places they voyaged to, regions they conquered, and why. Clear, concise and accessible, this book is recommended reading for anyone who is interested in this most fascinating of medieval peoples.”—Dr Charlie Rozier, University of Durham

“A thoughtful and carefully-crafted exploration of the Normans at the height of their medieval power. Judith Green brilliantly writes the Normans in Europe through meticulous research, illuminating the times, places and people that made these exciting and diverse worlds.”—Dr Katherine Weikert, University of Winchester