To Kidnap a Pope: Napoleon and Pius VII (Hardcover) 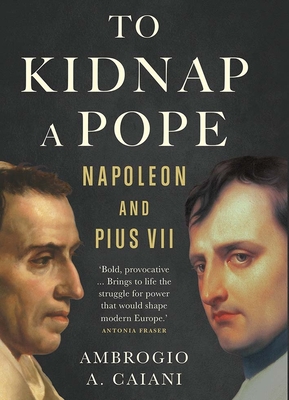 A groundbreaking account of Napoleon Bonaparte, Pope Pius VII, and the kidnapping that would forever divide church and state

“In gripping, vivid prose, Caiani brings to life the struggle for power that would shape modern Europe. It all makes for a historical read which is both original and enjoyable.”—Antonia Fraser, author of Marie Antoinette

“The story of the struggle, fought with cunning, not force, between the forgotten Roman nobleman Barnaba Chiaramonti, who became Pope Pius VII, and the all-too-well-remembered Napoleon.”—Jonathan Sumption, The Spectator, “Books of the Year”

In the wake of the French Revolution, Napoleon Bonaparte, First Consul of France, and Pope Pius VII shared a common goal: to reconcile the church with the state. But while they were able to work together initially, formalizing an agreement in 1801, relations between them rapidly deteriorated. In 1809, Napoleon ordered the Pope’s arrest.

Ambrogio Caiani provides a pioneering account of the tempestuous relationship between the emperor and his most unyielding opponent. Drawing on original findings in the Vatican and other European archives, Caiani uncovers the nature of Catholic resistance against Napoleon’s empire; charts Napoleon’s approach to Papal power; and reveals how the Emperor attempted to subjugate the church to his vision of modernity. Gripping and vivid, this book shows the struggle for supremacy between two great individuals—and sheds new light on the conflict that would shape relations between the Catholic church and the modern state for centuries to come.

Ambrogio A. Caiani is senior lecturer in modern European history at the University of Kent. He is the author of Louis XVI and the French Revolution 1789-1792.

“We can now see clearly that industrialisation, secularism and the emergent nation-state spelt not the end of religious faith, but rather its transformation into a political force in its own right...But it was the Catholic church and its response to the French Revolution that paved the way. To Kidnap a Pope tells the story of this epic struggle.”—Mark Mazower, Financial Times

“Try Ambrogio A. Caiani’s To Kidnap a Pope: Napoleon and Pius VII...It is the story of the struggle, fought with cunning, not force, between the forgotten Roman nobleman Barnaba Chiaramonti, who became Pope Pius VII, and the all-too-well-remembered Napoleon.”—Jonathan Sumption, Spectator ‘Books of the Year’

“Caiani leads the reader expertly through diplomatic and theological disputes, a dynastic marriage, international relations and war. He handles this complex narrative deftly, without too much assumption of prior knowledge.”—David Laven, Times Literary Supplement

‘Ambrogio A. Caiani tells the story of Napoleon’s second papal hostage-taking: an audacious 1809 plot to whisk Pius VII (1742–1823) from Rome in the dead of night and to break his stubborn resolve through physical isolation and intrusive surveillance...Caiani’s unique contribution in this work is to have set aside traditional, partisan tellings of this tale as good versus evil, secular versus religious, or state versus church. Instead, this version, even-handed and detailed in its contextualisation, is about two charismatic leaders going mano a mano."—Miles Pattenden, Australian Book Review


"In this enthralling study, Ambrogio Caiani gives a vivid account of the struggle between the two men, which would continue virtually unabated until Napoleon’s death on St Helena in 1821. He is commendably even-handed in his analysis, presenting it both as a personal tussle between two dogged opponents and as a clash between contrasting visions of the world: a Catholicism ever more drawn to counter-revolutionary reaction, and an emperor consciously pursuing his own brand of modernity."—Alan Forrest, BBC History Magazine


"Ambrogio Caiani gives us a bold, provocative new assessment of the French Emperor and his relationship with the Catholic Church. In gripping, vivid prose, Caiani brings to life the struggle for power that would shape modern Europe. It all makes for a historical read which is both original and enjoyable."—Antonia Fraser, author of Marie Antoinette

‘The decade-long struggle between Napoleon and Pope Pius VII is one of the great dramas of the revolutionary era, but remains little-known. Now, and for the first time in English, Ambrogio Caiani recounts this riveting story in full – and offers insight into one of the great conflicts that has shaped, and continues to shape, the modern world, the rivalry between religion and the state.’—Munro Price, author of Napoleon: The End of Glory

‘A riveting and compelling account of how the soft power of the Pope proved more durable than the military might of Napoleon.’—Tim Blanning, author of The Pursuit of Glory

‘An outstanding milestone. The relations between Napoleon and Pope Pius VII have never been examined in such detail before. Ambrogio Caiani takes Napoleon away from the battlefield to show him grappling with the Catholic Church, in what he admitted was the most difficult problem he ever faced. This beautifully written book will now be the essential guide to understanding why and how the greatest soldier of modern times failed to subdue a pope.’—William Doyle, author of The Oxford History of the French Revolution