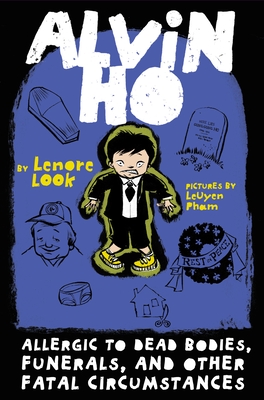 This is book number 4 in the Alvin Ho series.

The fourth book  in the hilarious chapter book series that tackles anxiety in a fun, kid-friendly way. Perfect for both beginning and reluctant readers, and fans of Diary of a Wimpy Kid!

Alvin, an Asian American second grader who's afraid of everything, is facing something truly scary: the idea that someone he loves might die. When Alvin's GungGung loses his best friend, Alvin (gulp) volunteers to go with him to the funeral.

Praise for Alvin Ho: Allergic to Dead Bodies, Funerals, and Other Fatal Circumstances

“Alvin proves the ideal companion to walk a child through the valley of the shadow….Alvin just keeps getting better and better.”
--Bulletin, starred review

"A fresh entry in what is overall an exceedingly enjoyable series; readers will cheer this latest."
--Kirkus Reviews, starred review

"Look's . . . intuitive grasp of children's emotions is rivaled only by her flair for comic exaggeration."
--Publishers Weekly, starred review