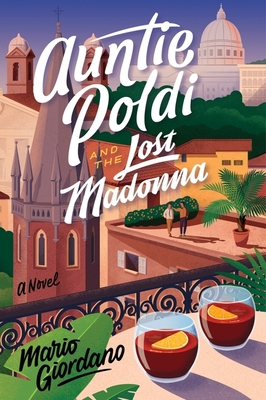 There’s only one Auntie Poldi: bewigged, cursing in Bavarian, and knocking back a wee shot of grappa as a pre-breakfast aperitif . . . or is there? No one is as they seem (and sound) in this hilarious new mystery featuring Sicily’s sultriest sleuth.

Strange dealings are afoot in the Apostolic Palace—a nun leapt to her death shortly after participating in a seemingly routine exorcism. But when a priest clad in Gammarelli and a Vatican commissario with an almost unholy level of sex appeal turn up at her door, Poldi is shocked to hear that she’s a suspect in their case.

Who is the woman being exorcised, and where has she disappeared to? And why in the world does she claim, in perfect Bavarian, to be Poldi, Isolde Oberreiter, of Torre Archirafi?

Poldi will need all the help she can get to clear her name, but her nephew has been distracted by a love affair gone sour, someone in the town has been spraying graffiti death threats on her front door, and her local friends seem to be avoiding her. And even Vito Montana balks when Poldi discovers that the case hinges on a lost Madonna statue, stolen years ago from the pope himself.

MARIO GIORDANO, the son of Italian immigrants, was born in Munich. Auntie Poldi and the Sicilian Lions, his first novel translated into English, was an Indie Next Pick, a Barnes &Noble Discover selection, an Amazon Best Book of the Month, and a Costco Staff Pick. He lives in Berlin.

"Exceptional...While the plot, which involves the theft of a statue of a Black Madonna, is satisfyingly packed with danger and surprises, it’s the digressions on Sicilian history, the Italian mentality, and Poldi’s pronouncements on life and sex that provide readers with some laugh-out-loud moments as well as food for thought. Those who appreciate the intelligent silliness of S.J. Perelman will want to see more of the sexy, quick-witted Poldi, who won’t take guff from any man, including the pope."—Publishers Weekly, starred review   "Poldi’s devil-may-care attitude and Nephew’s witty, self-deprecating narration are as entertaining as ever, but this series’ fourth entry is anchored by Poldi’s evolution as she faces both her future and her conflicted past."—​Booklist     —