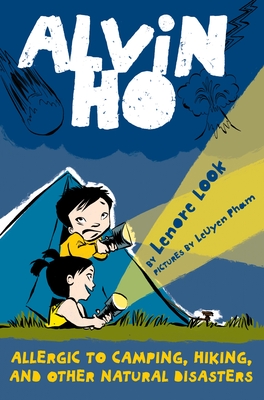 This is book number 2 in the Alvin Ho series.

Alvin takes on camping in the second book in the hilarious chapter book series that tackles anxiety in a fun, kid-friendly way. Perfect for both beginning and reluctant readers, and fans of Diary of a Wimpy Kid!

Alvin, an Asian American second grader who's afraid of everything, is back, and his worst fear has come true: he has to go camping. What will he do exposed in the wilderness with bears and darkness and . . . pit toilets? Luckily, he’s got his night-vision goggles and water purifying tablets and super-duper heavy-duty flashlight to keep him safe. And he’s got his dad, too.

LeUyen Pham is the award-winning and critically acclaimed illustrator of more than one hundred books for children. Her picture books include Bear Came Along by Richard T. Morris, named a Caldecott Honor Book, as well as Grace for President by Kelly DiPucchio and the Vampirina Ballerina series by Anne Marie Pace. She is also the illustrator of Princess in Black, the New York Times-bestselling middle grade series by Shannon and Dean Hale, and the co-creator, along with Shannon Hale, of the New York Times-bestselling graphic memoirs Real Friends and Best Friends. Her most recent author-illustrator book, Outside, Inside, is a recollection of our year in lockdown.

Praise for Alvin Ho: Allergic to Camping, Hiking, and Other Natural Disasters

"Readers can only hope that Alvin continues to describe in such wonderful detail his many allergic reactions."
--The Horn Book, starred review

"While Look certainly embellishes at times for comedic effect, she has created in Alvin a character that is as real as he is irascible...Pham’s simple but vibrant line drawings leap off the page. Another triumph for Alvin Ho."
--Kirkus Reviews

"Look's . . . intuitive grasp of children's emotions is rivaled only by her flair for comic exaggeration."
--Publishers Weekly, starred review

“Shares with Diary of a Wimpy Kid the humor that stems from trying to manipulate the world.” —Newsday