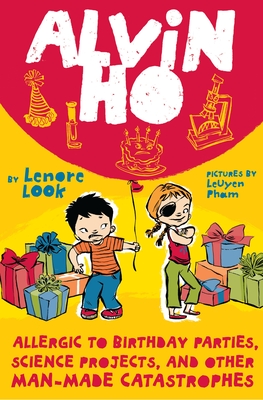 This is book number 3 in the Alvin Ho series.

There's nothing scarier than a birthday party in the third book in a hilarious chapter book series that tackles anxiety in a fun, kid-friendly way. Perfect for both beginning and reluctant readers, and fans of Diary of a Wimpy Kid!

Alvin Ho, an Asian American second grader, is afraid of everything. For example, what could possibly be so scary about a birthday party? Let Alvin explain:
• You might be dressed for bowling . . . but everyone else is dressed for swimming.
• You could get mistaken for the piñata.
• You could eat too much cake.
• You could throw up.

So when Alvin receives an invitation to a party—a girl’s party—how will he ever survive?

LeUyen Pham is the award-winning and critically acclaimed illustrator of more than one hundred books for children. Her picture books include Bear Came Along by Richard T. Morris, named a Caldecott Honor Book, as well as Grace for President by Kelly DiPucchio and the Vampirina Ballerina series by Anne Marie Pace. She is also the illustrator of Princess in Black, the New York Times-bestselling middle grade series by Shannon and Dean Hale, and the co-creator, along with Shannon Hale, of the New York Times-bestselling graphic memoirs Real Friends and Best Friends. Her most recent author-illustrator book, Outside, Inside, is a recollection of our year in lockdown.