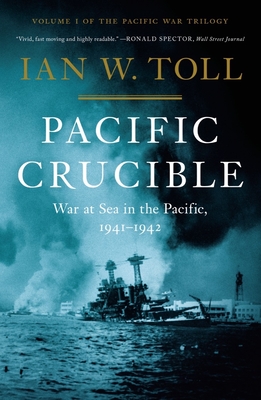 This is book number 1 in the The Pacific War Trilogy series.

The planning, the strategy, the sacrifices and heroics—on both sides—illuminating the greatest naval war in history.

On the first Sunday in December 1941, an armada of Japanese warplanes appeared suddenly over Pearl Harbor, Hawaii, and devastated the U.S. Pacific Fleet. Six months later, in a sea fight north of the tiny atoll of Midway, four Japanese aircraft carriers were sent into the abyss. Pacific Crucible tells the epic tale of these first searing months of the Pacific war, when the U.S. Navy shook off the worst defeat in American military history and seized the strategic initiative.

Ian W. Toll's dramatic narrative encompasses both the high command and the "sailor's-eye" view from the lower deck. Relying predominantly on eyewitness accounts and primary sources, Pacific Crucible also spotlights recent scholarship that has revised our understanding of the conflict, including the Japanese decision to provoke a war that few in the country's highest circles thought they could win. The result is a page-turning history that does justice to the breadth and depth of a tremendous subject.

An entertaining, impressively researched chronicle of the tense period between the bombing of Pearl Harbor and American victory at the battle of Midway.
— Kirkus

The research is thorough, the writing clear, and the narrative flow exemplary...it is difficult to think of a recent book on this subject that is of such consistently outstanding value.
— Booklist

Well documented—albeit from previously published materials—and well written. Experienced World War II history buffs may bypass if they feel no need to read another retelling of this phase of the Pacific War, but nonspecialists and general readers will want to consider it.
— LibraryJournal.com