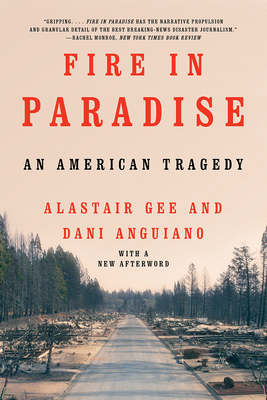 The harrowing story of the most destructive American wildfire in a century.

On November 8, 2018, the ferocious Camp Fire razed nearly every home in Paradise, California, and killed at least 85 people. Journalists Alastair Gee and Dani Anguiano reported on Paradise from the day the fire began and conducted hundreds of in-depth interviews with residents, firefighters and police, and scientific experts. Fire in Paradise is their dramatic narrative of the disaster and an unforgettable story of an American town at the forefront of the climate emergency.

Dani Anguiano writes for the Guardian and was a reporter for the Chico Enterprise-Record. She lives in the San Francisco Bay area.

Alastair Gee is an award-winning editor and reporter at the Guardian who has also written for The New Yorker online, the New York Times, and the Economist.

This is a frightening book that will make readers take stock of their own home surroundings, regional infrastructure, and the values of our times.
— Annie Proulx

Gripping.… Fire in Paradise has the narrative propulsion and granular detail of the best breaking-news disaster journalism.

A story that is both sweeping in scope and vivid in its particulars.
— Carolyn Kellogg - Washington Post

This remarkable account will remind you of the power of the human spirit, even, or especially, in a crisis.
— Bill McKibben

A gripping ticktock account.… [Fire in Paradise] covers the history of that part of California and the influence of climate change on these disasters, but at its core are visceral individual stories of bravery and tragedy.

A page-turner from the get-go.… The details of [the locals’] lives lend verisimilitude sure to hook the most callous of observers.
— Judith M. Gallman - Oakland Magazine

Gripping.… The scale of the disaster is enormous, but the authors’ focus on individual survival lends the book harrowing intimacy.
— Hank Stephenson - Shelf Awareness

So riveting and evocative that you can almost smell the smoke. Alastair Gee and Dani Anguiano’s account of how a city of 27,000 burned to the ground in a matter of hours reads like a thriller. It’s also crucial. As the world warms, cities across the arid West are increasingly at risk of suffering a fate similar to Paradise.
— Dan Egan, author of The Death and Life of the Great Lakes

A gripping and meticulously reported account of how one California community was wiped from the map.
— Adam Higginbotham, author of Midnight in Chernobyl