Strongmen: Mussolini to the Present (Paperback) 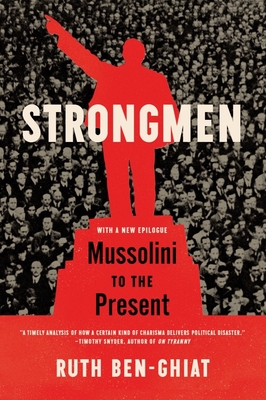 What modern authoritarian leaders have in common (and how they can be stopped).

Ruth Ben-Ghiat is the expert on the "strongman" playbook employed by authoritarian demagogues from Mussolini to Putin—enabling her to predict with uncanny accuracy the recent experience in America and Europe. In Strongmen, she lays bare the blueprint these leaders have followed over the past 100 years, and empowers us to recognize, resist, and prevent their disastrous rule in the future.

For ours is the age of authoritarian rulers: self-proclaimed saviors of the nation who evade accountability while robbing their people of truth, treasure, and the protections of democracy. They promise law and order, then legitimize lawbreaking by financial, sexual, and other predators.

They use masculinity as a symbol of strength and a political weapon. Taking what you want, and getting away with it, becomes proof of male authority. They use propaganda, corruption, and violence to stay in power.

No other type of leader is so transparent about prioritizing self-interest over the public good. As one country after another has discovered, the strongman is at his worst when true guidance is most needed by his country.

Recounting the acts of solidarity and dignity that have undone strongmen over the past 100 years, Ben-Ghiat makes vividly clear that only by seeing the strongman for what he is—and by valuing one another as he is unable to do—can we stop him, now and in the future.

Ruth Ben-Ghiat is an internationally acclaimed historian, speaker, and political commentator for the Atlantic, CNN, the Washington Post, and other publications. She is a professor of history and Italian studies at New York University and lives in New York City.

A timely analysis of how a certain kind of charisma delivers political disaster.
— Timothy Snyder, author of On Tyranny

Everyone who cares about American democracy should read this book.
— Sarah Kendzior, author of Hiding in Plain Sight

What separates this book from the many others that examine tyrants and tyranny—is the analysis that puts this phenomenon in perspective.
— David M. Shribman - Boston Globe

Simultaneously intimate and sweeping in scope.…Ruth Ben-Ghiat’s clear prose rings with a rhythm and cadence that today’s nonfiction too often lacks.
— Sarah Chayes, author of On Corruption in America and Thieves of State

For the reader inured by the drip-drip-drip of stories of brazen corruption over the course of years, it is bracing to see a half-decade’s worth of reporting so carefully distilled.…Ben-Ghiat does not shy away from revealing America’s role in enabling dictatorships around the world.…It’s a chilling current through the book and one that pricks the conscience of a reader.
— Talia Lavin - Washington Post

Ruth Ben-Ghiat delivers a superb examination of how close the US came to fascism—and how it has propped it up before.
— Charles Kaiser - Guardian

Ben-Ghiat's portrayal of fascist-era tyrants, murderous Cold War dictators, and would-be tyrants in our own day gives us a gripping and illuminating picture of how strongmen have deployed violence, seduction, and corruption. History, she shows, offers clear lessons not only about how these regimes are built, but also how they must be opposed, and how they end.
— Daniel Ziblatt, co-author of How Democracies Die

Ben-Ghiat teaches us about the leaders.…[She] cogently states that the secret of the strongman is that he needs the crowds much more than they need him.
— Federico Finchelstein - New Republic

Rich in anecdote.…Ms. Ben-Ghiat is at her most persuasive when she writes of the importance of the strongman’s cult of personality.
— Tunku Varadarajan - Wall Street Journal

Deep insight and a vigorous style…[A] brilliant contribution to the political psychology of democracy.
— Joy Connolly, president of the American Council of Learned Societies