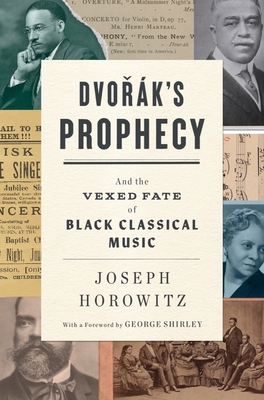 A provocative interpretation of why classical music in America "stayed white"—how it got to be that way and what can be done about it.

In 1893 the composer Antonín Dvorák prophesied a “great and noble school” of American classical music based on the “negro melodies” he had excitedly discovered since arriving in the United States a year before. But while Black music would foster popular genres known the world over, it never gained a foothold in the concert hall. Black composers found few opportunities to have their works performed, and white composers mainly rejected Dvorák’s lead.

Joseph Horowitz ranges throughout American cultural history, from Frederick Douglass and Huckleberry Finn to George Gershwin’s Porgy and Bess and the work of Ralph Ellison, searching for explanations. Challenging the standard narrative for American classical music fashioned by Aaron Copland and Leonard Bernstein, he looks back to literary figures—Emerson, Melville, and Twain—to ponder how American music can connect with a “usable past.” The result is a new paradigm that makes room for Black composers, including Harry Burleigh, Nathaniel Dett, William Levi Dawson, and Florence Price, while giving increased prominence to Charles Ives and George Gershwin.

Dvorák’s Prophecy arrives in the midst of an important conversation about race in America—a conversation that is taking place in music schools and concert halls as well as capitols and boardrooms. As George Shirley writes in his foreword to the book, “We have been left unprepared for the current cultural moment. [Joseph Horowitz] explains how we got there [and] proposes a bigger world of American classical music than what we have known before. It is more diverse and more equitable. And it is more truthful.”

A former New York Times music critic, Joseph Horowitz is the author of ten books exploring the history of American music, including Classical Music in America and Artists in Exile –both named books of the year by the Economist. He lives in New York City.

[A] sincere and erudite effort to right ignorance and wrongs, and to bring this long-forgotten music into the sunlight.
— Martha Anne Toll - Washington Post

Horowitz is determined to overcome the ’silo mentality’ that has dulled curiosity about how American classical music can be related to the larger cultural context across different eras(...) This perspective is what makes [his] larger project such a vital resource for rethinking how American music matters.
— Thomas May - Gramophone

Dvorák's Prophecy is a passionately-argued and -written book that will stir deep and long, long overdue discussion…Horowitz is a master of the hitherto unrevealed, and he's on his best game in this book.

Dvorák's Prophecy…will facilitate much-needed discussion about the way we regard the American classical music traditions—discussions not at all limited to the classroom.

Dvorák's Prophecy will become a flashpoint for necessary conversations not only about the performing arts, but also broader issues of import: race, American historiography, and the search for our national soul.

In his exploration of the unused past of Dvorák, Ives, Farwell, Burleigh, Dett, Dawson, Price and Gershwin, Joseph Horowitz invites us to a marvelous rediscovery… A feast awaits, both in this book and in the music it describes.
— Allen C. Guelzo, James Madison Program in American Ideal and Institutions, Princeton University

Joseph Horowitz’s Dvorák's Prophecy is unique in its emphasis on the connections between major nineteenth-century American literary figures like Herman Melville, Walt Whitman, and Mark Twain and American classical music, and it is admirable in its demonstration of the centrality of African American literature, culture, and history to both the American musical tradition and the American literary tradition.