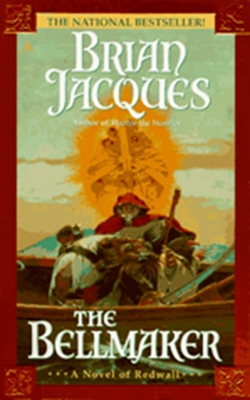 This is book number 7 in the Redwall series.

New York Times bestselling author Brian Jacques gives us another tale of Redwall, filled with “The Knights of the Round Table with paws” (The Sunday Times) along with their friends and enemies.

More than four seasons have passed since Mariel the Warriormouse and the rogue mouse, Dandin, set off from Redwall in search of adventure, and Joseph the Bellmaker is worried. Where is his beloved daughter? Joseph's answer comes to him in a dream, and soon he's off, accompanied by the intrepid Finnbarr Galedeep and the brave crew of the good ship, Pearl Queen, to save a kingdom and rescue Mariel.

But what's behind the riddle in the dream? Can Joseph guess its meaning and find his daughter before the dreaded Foxwolf, Urgan Nagru, plunders the kingdom of Southsward? Can this be the end of Mariel the Warriormouse? The momentous questions of this seventh epic in the Redwall series will hold a new audience of readers in its magical spell and captivate dedicated Redwall followers as well.