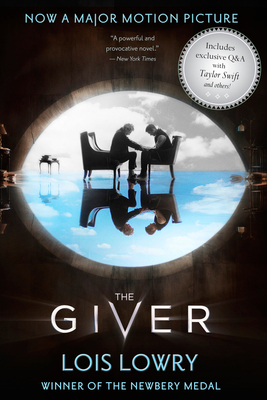 This is book number 1 in the Giver Quartet series.

In Lois Lowry’s Newbery Medal–winning classic, twelve-year-old Jonas lives in a seemingly ideal world. Not until he is given his life assignment as the Receiver does he begin to understand the dark secrets behind his fragile community.

This movie tie-in edition features cover art from the movie and an exclusive Q&A with cast members, including Taylor Swift, Brenton Thwaites, and Cameron Monaghan.

Life in the community where Jonas lives is idyllic. Designated birthmothers produce newchildren, who are assigned to appropriate family units. Citizens are assigned their partners and their jobs. No one thinks to ask questions. Everyone obeys. Everyone is the same. Except Jonas.

Not until he is given his life assignment as the Receiver of Memory does he begin to understand the dark, complex secrets behind his fragile community. Gradually Jonas learns that power lies in feelings. But when his own power is put to the test—when he must try to save someone he loves—he may not be ready. Is it too soon? Or too late?

The Giver has become one of the most influential novels of our time. Don't miss the powerful companion novels in Lois Lowry's Giver Quartet: Gathering Blue, Messenger, and Son.

Lois Lowry is the author of more than forty books for children and young adults, including the New York Times bestselling Giver Quartet and popular Anastasia Krupnik series. She has received countless honors, among them the Boston Globe-Horn Book Award, the Dorothy Canfield Fisher Award, the California Young Reader’s Medal, and the Mark Twain Award. She received Newbery Medals for two of her novels, Number the Stars and The Giver.

“Lowry is once again in top form raising many questions while answering few, and unwinding a tale fit for the most adventurous readers.” — Publishers Weekly (starred review)

“The simplicity and directness of Lowry's writing force readers to grapple with their own thoughts.” — Booklist (starred review)

“Lois Lowry has written a fascinating, thoughtful science-fiction novel. The story is skillfully written; the air of disquiet is delicately insinuated. And the theme of balancing the virtues of freedom and security is beautifully presented." — Horn Book (starred review)

"The Giver has things to say that cannot be said too often, and I hope there will be many, many young people who will be willing to listen. A warning in narrative form." — Washington Post