Alvin Ho: Allergic to the Great Wall, the Forbidden Palace, and Other Tourist Attractions (Paperback) 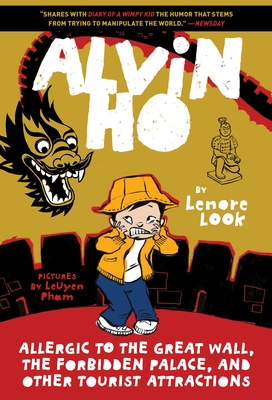 This is book number 6 in the Alvin Ho series.

Alvin and his family visit China in the hilarious chapter book series that tackles anxiety in a fun, kid-friendly way. Perfect for both beginning and reluctant readers, and fans of Diary of a Wimpy Kid!

Alvin, an Asian American second grader who’s afraid of everything, is taking his fears to a whole new level—or should we say, continent. On a trip to introduce brand-new baby Ho to relatives in China, Alvin’s anxiety is at fever pitch. First there’s the harrowing 16-hour plane ride; then there’s a whole slew of cultural differences to contend with: eating lunch food for breakfast, kung fu lessons, and acupuncture treatment (yikes!). Not to mention the crowds that make it easy for a small boy to get lost.