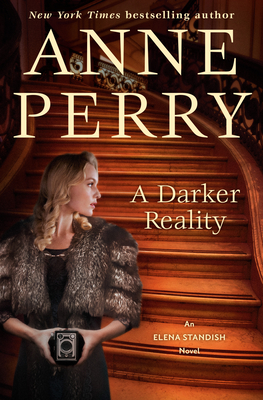 By Anne Perry
Available to order- email info@loyaltybookstores.com
Not In Store - Available to Special Order

This is book number 3 in the Elena Standish series.

A personal trip turns perilous for Elena Standish after the murder of a British spy forces her to face dark family secrets in this exciting 1930s mystery by bestselling author Anne Perry.

“An absorbing and calculating thriller/mystery that grabs the reader from the first page.”—Great Mysteries and Thrillers

On her first trip to Washington, D.C., Elena Standish finally gets to visit her American mother’s wealthy parents and their magnificent home. Elena’s grandparents are marking a milestone anniversary by throwing an elaborate party with the influential friends of her grandfather, a prominent political industrialist. Even President and First Lady Franklin and Eleanor Roosevelt are there, and Elena takes pride in capturing the illustrious guests on camera. But the festivities come to a sudden and tragic end when one of the guests, Lila Worth, is run over by a car in the driveway outside. Elena believes Lila was trying to tell her something before her death, and when a call from her employer back home, MI6, confirms that Lila was a British spy, Elena pairs with a fellow agent to find out what vital information the young woman had in her possession.

Soon an arrest is made in Lila’s murder, and to Elena’s horror, the accused is none other than her own grandfather, who claims his political enemies are trying to frame him. But who are these enemies, and how can Elena defend this man she barely knows? Nevertheless, determined to clear his name and save her family from disgrace, she delves into the details of her grandfather’s investments and discovers that his business secrets run deep. As Elena begins to question his loyalties, she wonders if she can trust anyone in this threatening new world order.

Anne Perry is the New York Times bestselling author of two acclaimed series set in Victorian England: the William Monk novels and the Charlotte and Thomas Pitt novels. She is also the author of a series featuring Thomas and Charlotte Pitt’s son, Daniel, including One Fatal Flaw and Death with a Double Edge; the Elena Standish series, including Death in Focus and A Question of Betrayal; five World War I novels; nineteen holiday novels, most recently A Christmas Legacy; and a historical novel, The Sheen on the Silk, set in the Byzantine Empire. Anne Perry lives in Los Angeles.

Praise for A Darker Reality

“A good historical mystery is like a balancing act [and Anne Perry] gets the balance just right. It would be easy to believe that Elena Standish really did exist, and that the books are actual biographical stories. Perry proves once again why she is among the top writers of historical mysteries.”—Booklist

“A Darker Reality is full of Anne Perry’s trademark moral quandaries and historical detail that instantly brings credibility to the story but also makes it feel like an actual slice of world history.”—Bookreporter

Praise for A Question of Betrayal

“[Anne] Perry ties her story-strands together in convincing fashion, in a work whose twentieth-century setting seems to have brought out new psychological and descriptive nuances in an author better-known for her Victorian-era novels.”—The Wall Street Journal

“Suspenseful and tense . . . [A Question of Betrayal] shows how brilliant a writer and plotter Anne Perry is.”—Bookreporter

Praise for Death in Focus

“Readers who love historical mysteries know that some of the most dramatic stories are set in the interim between the two world wars, when both the victors and the vanquished felt uneasy about their provisional hold on peace. Anne Perry stakes a strong claim to that unstable terrain in Death in Focus . . . the first book in a new series that opens in 1933 as Elena Standish, a resourceful photographer, is caught up in the world of international intrigue.”—The New York Times Book Review

“Death in Focus [is] reminiscent of works by Eric Ambler and Graham Greene. Cameo appearances by historical figures . . . enhance this thrilling work. . . . Perry conjures the mixed emotions and misplaced optimism of a period when many Establishment figures were desperate to avoid another world war.”—The Wall Street Journal

“Perry has found the perfect time period to showcase a family’s impassioned defense of democracy and social justice in the face of rising totalitarianism. . . . At turns heartbreaking and action-packed, this gripping and superbly written story proves Perry still has what it takes.”—Library Journal (starred review)