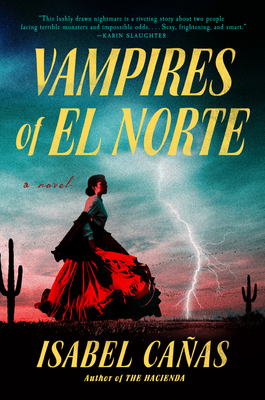 Vampires and vaqueros face off on the Texas-Mexico border in this supernatural western from the author of The Hacienda.

As the daughter of a rancher in 1840s Mexico, Nena knows a thing or two about monsters—her home has long been threatened by tensions with Anglo settlers from the north. But something more sinister lurks near the ranch at night, something that drains men of their blood and leaves them for dead.

Something that once attacked Nena nine years ago.

Believing Nena dead, Néstor has been on the run from his grief ever since, moving from ranch to ranch working as a vaquero. But no amount of drink can dispel the night terrors of sharp teeth; no woman can erase his childhood sweetheart from his mind.

When the United States attacks Mexico in 1846, the two are brought abruptly together on the road to war: Nena as a curandera, a healer striving to prove her worth to her father so that he does not marry her off to a stranger, and Néstor as a member of the auxiliary cavalry of ranchers and vaqueros. But the shock of their reunion—and Nena’s rage at Néstor for seemingly abandoning her long ago—is quickly overshadowed by the appearance of a nightmare made flesh.

And unless Nena and Néstor work through their past and face the future together, neither will survive to see the dawn.

Isabel Cañas is a Mexican American speculative fiction writer. After having lived in Mexico, Scotland, Egypt, Turkey, and New York City, among other places, she has settled in the Pacific Northwest. She holds a doctorate in Near Eastern Languages and Civilizations and writes fiction inspired by her research and her heritage.

“Set during the Mexican-American War—this lushly drawn nightmare is a riveting story about two people facing terrible monsters and impossible odds. Cañas has the ability to tell a story that is at once sexy, frightening, and smart.”
—New York Times and International Bestselling Author, Karin Slaughter

Praise for The Hacienda

“A thing of uncanny, chilling beauty. Hauntings, exorcisms, incantations, forbidden love — The Hacienda transports one to a world where love triumphs over demons.”
—The New York Times

“A tale of romance, dread, and supernatural menace."
—Harper’s Bazaar

“[A] gothic tale of doomed love and vengeful spirits."
—The Washington Post

“[A] chilling Mexican gothic horror, full of suspense that will have you tethered to each page.”
—NPR

“Looking for supernatural suspense, forbidden love and a history lesson set in the aftermath of the Mexican War of Independence? Pick up The Hacienda."
—Parade

“Don't read this gothic horror right before bedtime, especially if you're prone to nightmares."
—Good Housekeeping

"[A] dazzling debut….Yeah, this one will keep you up at night, muttering 'one last page."
—E! News

"A deliciously haunting novel that slithers into your mind and keeps you dreaming of it."
—Buzzfeed

"After you read and enjoy Mexican Gothic, pick up this beautifully unsettling tale. Set in post-Independence War Mexico, this chilling suspense novel will leave you with chills as you follow the terrifying haunting at Hacienda San Isidro."
—Glamour

“Pretty much the perfect Gothic novel… meaning it reads like a brilliant piece of historical fiction and a, ‘Okay, I’m gonna need to sleep with the lights on now,’ horror novel.”
—Jezebel

“Gothic terror at its best, layered with tension: class, religious, and sexual. You will be so immersed in its skillful storytelling that the hours will vanish.”
—Simone St. James, New York Times bestselling author of The Sun Down Motel

"A haunted history, a gory gothic, a forbidden romance. This book kept me up at night, and it was worth every second of lost sleep."
—Alix E. Harrow, New York Times bestselling author of The Once and Future Witches

“A hypnotic, sinister tale that is equal parts terrifying and luxurious. Cañas’s debut is a nightmare lined with velvet.”
—Roshani Chokshi, New York Times bestselling author of The Gilded Wolves

“The Hacienda is a perfect gothic and Cañas is not afraid to pull in the horror element. An impressive debut.”
—Jayne Ann Krentz, New York Times bestselling author of Lightning in a Mirror

“A haunting gorgeous tale of doomed love, vengeful spirits, and tortured faith that I could not put down.”
—S.A. Chakraborty, bestselling author of The Empire of Gold

"Lush, sinister, and darkly romantic. The Hacienda is a haunting and brilliant debut."
—Alexis Henderson, author of The Year of the Witching

“Absolutely enthralling—I read it in one sitting because its vivid prose and spectacular twists and turns made it impossible to put down.”
—Genevieve Gornichec, bestselling author of The Witch’s Heart

“As romantic as it is terrifying, The Hacienda is a lush, atmospheric read that never pulls any punches. Horror fans, fantasy fans, and romance fans will all find something to love here.”
—Hannah Whitten, New York Times bestselling author of For the Wolf