Murder Under Her Skin: A Pentecost and Parker Mystery (Large Print / Paperback) 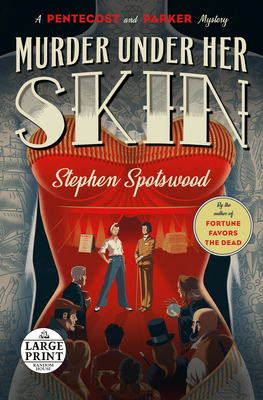 By Stephen Spotswood
Available to order- email info@loyaltybookstores.com
Not In Store - Available to Special Order

“Murder Under Her Skin will light a fire under eager fans of Pentecost and Parker. Filled with snappy dialogue, clever plot, and richly imagined characters — readers will clamor for the next installment. It is cracking good fun!”
— Pamela Klinger-Horn, Valley Bookseller, Stillwater, MN

Someone’s put a blade in the back of the Amazing Tattooed Woman, and Willowjean “Will” Parker’s former knife-throwing mentor has been stitched up for the crime. To uncover the truth, Will and her boss, world-famous detective Lillian Pentecost , travel south into a snakepit of old grudges, small-town crime, and secrets worth killing for.

New York, 1946: The last time Will Parker let a case get personal she walked away with a broken face, a bruised ego, and the solemn promise never again to let her heart get in the way of her job. But she called Hart and Halloway’s Travelling Circus and Sideshow home for five years, and Ruby Donner, the circus’s tattooed ingenue, was her friend. To make matters worse the prime suspect is Valentin Kalishenko, the man who taught Will everything she knows about putting a knife where it needs to go.
To uncover the real killer and keep Kalishenko from a date with the electric chair, Will and Ms. Pentecost join the circus in sleepy Stoppard, Virginia, where the locals like their cocktails mild, the past buried, and big city detectives not at all. The two swiftly find themselves lost in a funhouse of lies as Will begins to realize that her former circus compatriots aren’t playing it straight, and that her murdered friend might have been hiding a lot of secrets beneath all that ink.
Dodging fistfights, firebombs, and flying lead, Will puts a lot more than her heart on the line in the search of the truth. Can she find it before someone stops her ticker for good?
Step right up! Murder Under Her Skin is a delightfully hardboiled high-wire act starring two daring heroines dead set on justice.

STEPHEN SPOTSWOOD is an award-winning playwright, journalist, and educator. As a journalist, he has spent much of the last two decades writing about the aftermath of the wars in Iraq and Afghanistan and the struggles of wounded veterans. His dramatic work has been widely produced across the United States. He makes his home in Washington, D.C. with his wife, young adult author Jessica Spotswood.

“A delight. . . It’s a pleasure to watch [Pentecost and Parker] sifting through red herrings and peeling secrets back like layers of an onion, all while revealing even more of themselves without guilt or shame. Just like his mystery-writing ancestor [Rex Stout], Spotswood understands that the detective story should be sound, but spending time with unforgettable characters is paramount.”—The New York Times Book Review

"Will’s slangy first-person narrative is captivating, and fans of circus life, such as it was, will enjoy this tale, as will followers of the 1940s hard-boiled detective genre, considerably enlivened here by having two no-nonsense women do the sleuthing."—Booklist

"Parker narrates the novel in a voice shot through with not only guts but wry humor.... The relationship between Pentecost and Parker grows ever more fun with time. So where will they go next? For me, it doesn’t matter as long as I get to go along."—BookReporter

"Just as vibrant and compelling as [Fortune Favors the Dead]. . . The best things about this novel/series are Spotswood’s clever prose and dialogue, which so perfectly calls to mind the time period and the very colorful characters he’s crafted. . . Spotswood is quickly climbing the ranks of my favorite current authors, securing himself a spot on my instant-order list, and his Pentecost and Parker mysteries are a solid recommendation to any fans of historical fiction, lady investigators, or mysteries centered around queer characters."—Criminal Element

"Set amid the glitz and glimmer of showbiz, [Murder Under Her Skin] expose[s] the corruption and abuse that exists after the shine of spotlights go out. But even more than that, [it examines a critical period] during which women's roles were shifting as they demanded more freedoms. . . As they work the case, Will and Lillian find the world in flux around them, which Spotswood ably explores without distracting from the central mystery. . . None of the characters in this mystery quite know how to cope with these seismic cultural changes, setting Murder Under Her Skin apart from more simplistic stories set in the same time period."—BookPage

"Just like the first book in the series, Murder Under Her Skin is a fun and engaging read with a whodunit that keeps you guessing and entertained."—Historical Novel Society

Praise for Stephen Spotswood and the Pentecost and Parker Mystery Series:

"Razor-sharp style, tons of flair, a snappy sense of humor, and all the most satisfying elements of a really good noir novel." —Tana French, author of The Searcher

"Bullets, blood, bodies, and belly-laughs: all the ingredients of a classic mystery novel. Stephen Spotswood hard-boils with the best of ‘em!" —Alan Bradley, author of the Flavia de Luce Mystery Series

"Takes gritty 40s noir, shakes it up, gives it a charming twist, and serves it up with unforgettable style. My new favorite sleuthing duo are Pentecost and Parker, the spiritual sisters of Nero Wolfe and Archie Goodwin. An utterly brilliant debut!" —Deanna Raybourn, author of the Veronica Speedwell Mysteries

"Humorous and fun [with] all the hallmarks of an Agatha Christie mystery, and there’s a delightful dose of noir thrown in for the more hardcore pulp fiction crowd, too. . .  This duo will be around for years to come." —Bookpage *Starred Review*

"Every page—nay, every paragraph—is rich and compelling. . . If anyone’s the heir apparent to Phryne Fisher or Elementary’s Sherlock and Joan, it’s Parker and Pentecost. This is an adventure you’ll want to rave about to strangers on the streets." —Criminal Element

"A relentlessly entertaining romp through 1940’s New York City, and through the annals of mystery fiction, as well, with many sly nods to authors of the past and some invigorating reinventions of classic tropes and gambits." —CrimeReads

"Sparkles [with] wit and personality. . . This classic noir-style mystery recast with humor, female leads and superb style is both satisfying and great fun." —Shelf Awareness

"If you’ve been dying for a fresh take on the sleuth genre, this book delivers that and more. A mix of classic noir aesthetics and tropes with an inclusive twist. . . The kind of mystery series that will capture your imagination in new and fun ways, and have you desperate to get your hands on more." —Get Literary