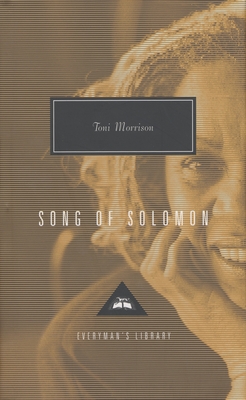 The master of American letters turns her insightful, piercing gaze upon the world of men in her third, National Book Critics Circle Award-winning novel. Using the hollow and leisurely life of Macon "Milkman" Dead as a point of departure, Morrison's hypnotic third novel explores themes of heritage, manhood, parent-child relationships, and the powers and pressures of taking responsibility for one's life. All packaged in her trademark razor's edge prose.

In this celebrated novel, Nobel Prize-winning author Toni Morrison created a new way of rendering the contradictory nuances of black life in America. Its earthy poetic language and striking use of folklore and myth established Morrison as a major voice in contemporary fiction.

Song of Solomon begins with one of the most arresting scenes in our century's literature: a dreamlike tableau depicting a man poised on a roof, about to fly into the air, while cloth rose petals swirl above the snow-covered ground and, in the astonished crowd below, one woman sings as another enters premature labor. The child born of that labor, Macon (Milkman) Dead, will eventually come to discover, through his complicated progress to maturity, the meaning of the drama that marked his birth.

Toni Morrison's novel is at once a romance of self-discovery, a retelling of the black experience in America that uncovers the inalienable poetry of that experience, and a family saga luminous in its depth, imaginative generosity, and universality. It is also a tribute to the ways in which, in the hands of a master, the ancient art of storytelling can be used to make the mysterious and invisible aspects of human life apparent, real, and firm to the touch.

Toni Morrison is the author of eleven novels, from The Bluest Eye (1970) to God Help the Child (2015). She received the National Book Critics Circle Award, the Pulitzer Prize, and in 1993 she was awarded the Nobel Prize in Literature. She died in 2019.

“A rich, full novel. . . . It lifts us up [and] impresses itself upon us like a love affair.” —The New York Times Book Review

“Exuberant. . . . An artistic vision that encompasses both a private and national heritage.”

“A rhapsodic work. . . . Intricate and inventive.” —The New Yorker

“Stunningly beautiful. . . . Full of magnificent people. . . . They are still haunting my house. I suspect they will be with me forever.” —Anne Tyler, The Washington Post

“It places Toni Morrison in the front rank of contemporary American writers. She has written a novel that will endure.” —The Washington Post

“Lovely. . . . A delight, full of lyrical variety and allusiveness. . . . [An] exceptionally diverse novel.” —The Atlantic Monthly

“Morrison is a terrific storyteller. . . . Her writing evokes the joyful richness of life.” —Newsday

“Morrison dazzles. . . . She creates a black community strangely unto itself yet never out of touch with the white world. . . . With an ear as sharp as glass she has listened to the music of black talk and uses it as a palette knife to create black lives and to provide some of the best fictional dialogue around today.” —The Nation

“A marvelous novel, the most moving I have read in ten years of reviewing.” —Cleveland Plain Dealer

“Toni Morrison has created a fanciful world here. . . . She has an impeccable sense of emotional detail. She’s the most sensible lyrical writer around today.” —The Philadelphia Inquirer

“A fine novel exuberantly constructed. . . . So rich in its use of common speech, so sophisticated in its use of literary traditions and language from the Bible to Faulkner . . . it is also extremely funny.” —The Hudson Review

“Toni Morrison is an extraordinarily good writer. Two pages into anything she writes one feels the power of her language and the emotional authority behind that language. . . . One closes the book warmed through by the richness of its sympathy, and by its breathtaking feel for the nature of sexual sorrow.” —The Village Voice

“Morrison moves easily in and out of the lives and thoughts of her characters, luxuriating in the diversity of circumstances and personality, and revelling in the sound of their voices and of her own, which echoes and elaborates theirs.” —The New Yorker