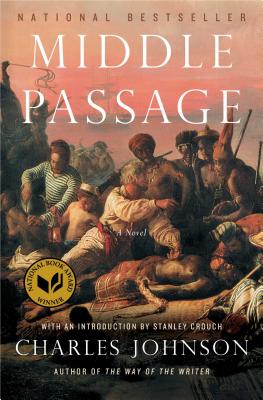 A twenty-fifth anniversary edition of Charles Johnson’s National Book Award-winning masterpiece—"a novel in the tradition of Billy Budd and Moby-Dick…heroic in proportion…fiction that hooks the mind" (The New York Times Book Review)—now with a new introduction from Stanley Crouch.

Rutherford Calhoun, a newly freed slave and irrepressible rogue, is lost in the underworld of 1830s New Orleans. Desperate to escape the city’s unscrupulous bill collectors and the pawing hands of a schoolteacher hellbent on marrying him, he jumps aboard the Republic, a slave ship en route to collect members of a legendary African tribe, the Allmuseri. Thus begins a voyage of metaphysical horror and human atrocity, a journey which challenges our notions of freedom, fate and how we live together. Peopled with vivid and unforgettable characters, nimble in its interplay of comedy and serious ideas, this dazzling modern classic is a perfect blend of the picaresque tale, historical romance, sea yarn, slave narrative and philosophical allegory.

Now with a new introduction from renowned writer and critic Stanley Crouch, this twenty-fifth anniversary edition of Middle Passage celebrates a cornerstone of the American canon and the masterwork of one of its most important writers. "Long after we’d stopped believe in the great American novel, along comes a spellbinding adventure story that may be just that" (Chicago Tribune).

Charles Johnson is a novelist, essayist, literary scholar, philosopher, cartoonist, screenwriter, and professor emeritus at the University of Washington in Seattle. A MacArthur fellow, his fiction includes Night Hawks, Dr. King’s Refrigerator, Dreamer, Faith and the Good Thing, and Middle Passage, for which he won the National Book Award. In 2002 he received the Arts and Letters Award in Literature from the American Academy of Arts and Letters. He lives in Seattle.

Long after we'd stopped believing in the great American novel, along comes a spellbinding adventure story that may be just that."
— Chicago Tribune

"A novel in the honorable tradition of Billy Budd and Moby Dick... heroic in proportion...fiction that hooks into the mind."
— The New York Times Book Review

"A rousing adventure yarn that resonates with and echoes the spirit of early sea stories...Johnson has fashioned a tale of travel and tragedy, yearning and history, and done so from a different, rarely explored viewpoint....Middle Passage is a story of slavery, often brilliant in its structure and riveting in the way it's told."
— San Francisco Chronicle

"A vivid and compelling work."
— Essence

"A fascinating allegory of the way black and whites came together in this country...Johnson's remarkable novel challenges us."
— USA Today