The Master Plan: My Journey from Life in Prison to a Life of Purpose (Paperback) 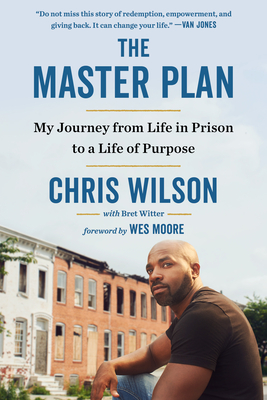 "The Master Plan is less of a road map and more of a philosophy that we should all take to heart: We are all better than our worst decision, our sense of justice should honor the redemptive possibilities inherent in every person, and our destinies are truly intertwined."--Wes Moore, author of The Other Wes Moore

Growing up in Washington, DC, Chris Wilson was surrounded by violence and despair. He watched his family and neighborhood shattered by trauma, and he lost his faith. One night when he was seventeen, defending himself, he killed a man. He was sentenced to life in prison with no hope of parole.

But what should have been the end of his story became the beginning. Behind bars, Wilson embarked on a remarkable journey of self-improvement--reading, working out, learning languages, even starting a business. At nineteen, he sat down and wrote a list of all the things he intended to accomplish, and all the steps he'd have to take to get there. He called it his Master Plan. He revised that plan regularly and followed it religiously. Sixteen years later, it led him to an unlikely opportunity--and to a promise he has been working hard to live up to every day since. Harrowing, heartbreaking, and ultimately triumphant, The Master Plan is a memoir for this moment, proving that every person is capable of doing great things.

Chris Wilson lives in Baltimore, Maryland, and works as a visual artist and a social justice advocate. Through his work, he investigates societal injustices, human relationships, and public policies. His artwork is collected and displayed internationally. He is also the founder of the Chris Wilson Foundation, which supports social entrepreneurs and prison education, including re-entry and financial literacy for returning citizens, as well as art-related programs.

Praise for The Master Plan

“Inspiring without being preachy, Wilson’s manifesto will greatly appeal to today’s youth.”—Publishers Weekly

“Uplifting...Wilson candidly shares the eye-opening details of his time in prison with a prose style that moves with directness and refreshingly unfettered honesty...A smoothly written memoir steeped in positive reinforcement and hope for the future.”—Kirkus Reviews

“Wilson’s voice comes through loud and clear in this memoir that should have wide appeal.”--Library Journal

"The Master Plan is less of a roadmap and more of a philosophy that we should all take to heart: we are all better than our worst decision, our sense of justice should honor the redemptive possibilities inherent in every person, and our destinies are truly intertwined.”—Wes Moore, author of The Other Wes Moore

“An incredibly moving book that will change the way you look at the criminal justice system.”—Senator Bernie Sanders

“This is a brave book, full of thought-provoking insight on criminal justice, the modern prison system, and the possibility of redemption. And yet what sticks with me most is the beautiful, heartbreaking mother-son relationship....Thank you, Chris Wilson, for taking us into the cave, so that we can better understand the light.”—Beth Macy, bestselling author of Dopesick and Factory Man

“I’ve admired Chris Wilson’s work with the underprivileged and returning citizens for the last three years, but as this book proves, you don’t really know a man until you understand his struggle. Do not miss this story of redemption, empowerment and giving back. It can change your life.”—Van Jones, TV show host and author of Beyond the Messy Truth

“The Master Plan adds a personal narrative to Michelle Alexander’s The New Jim Crow, making it equally important. Chris Wilson is our generation’s go-to voice on mass incarnation and redemption. Not only does he brilliantly articulate his struggle, he offers a clear path to what needs to be done if we truly want reform. The difference between Wilson and other scholars is that he doesn’t only talk about the ills of the system––he’s survived that system and changed his life, and now spends his time helping other people do the same. This book will change the world.”—D Watkins, bestselling author of The Beast Side and The Cook Up

“A bright light in a moment of moral darkness. Chris Wilson’s story is both a triumph and a call to arms on behalf of the incarcerated.”—Nathalie Molina Niño, CEO of BRAVA Investments and author of Leapfrog