Beyond (The Founding of Valdemar #1) (Hardcover) 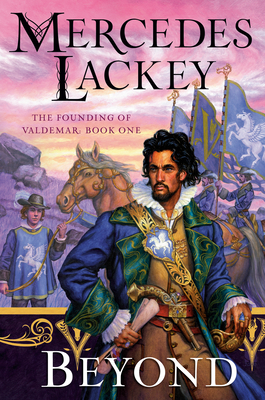 By Mercedes Lackey
Available to order- email info@loyaltybookstores.com
Not In Store - Available to Special Order

This is book number 1 in the The Founding of Valdemar series.

The long-awaited founding of Valdemar comes to life in this new series from a New York Times bestselling author and beloved fantasist.

Within the Eastern Empire, Duke Kordas Valdemar rules a tiny, bucolic Duchy that focuses mostly on horse breeding. Anticipating the day when the Empire’s exploitative and militant leaders would not be content to leave them alone, Korda’s father set out to gather magicians in the hopes of one day finding a way to escape and protect the people of the Duchy from tyranny.

Kordas has lived his life looking over his shoulder. The signs in the Empire are increasingly dire. Under the direction of the Emperor, mages have begun to harness the power of dark magics, including blood magic, the powers of the Abyssal Planes, and the binding and "milking" of Elemental creatures.

But then one of the Duchy’s mages has a breakthrough. There is a way to place a Gate at a distance so far from the Empire that it is unlikely the Emperor can find or follow them as they evacuate everyone that is willing to leave.

But time is running out, and Kordas has been summoned to the Emperor's Court.

Can his reputation as a country bumpkin and his acting skills buy him and his people the time they need to flee?  Or will the Emperor lose patience, invade to strip Valdemar of everything of worth, and send its conscripted people into the front lines of the Imperial wars?

Mercedes Lackey is a full-time writer and has published numerous novels and works of short fiction, including the bestselling Heralds of Valdemar series. She is also a professional lyricist and a licensed wild bird rehabilitator.

Praise for the Valdemar novels

"Eye Spy feels like a present written especially for me. You're gonna want to read it. This one's a firecracker." —Tor.com

"Whether it's the spellbinding world, the intrigue of the plot, or the simple yet remarkable narrative style—it is impossible to say which of these makes the story so good, but one thing is for sure: Closer to Home marks the beginning of another fantastic Lackey series." —RT Reviews

"Returning to her beloved Valdemar universe, Lackey opens her new series at a pivotal time in the history of Valdemar.... Series fans will enjoy the variations on a familiar theme, while enough information is presented for first-timers to discover a world of high adventure and individual courage. Highly recommended." —Library Journal

"Closer to the Heart has the two things that have always made me love these books: a richly detailed history of the world, and beautiful writing." —The Arched Doorway

"Lackey is a master at characterization." —The Ranting Dragon