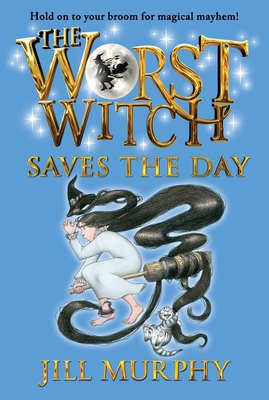 This is book number 5 in the Worst Witch series.

Catch up on Mildred Hubble’s magical adventures at Miss Cackle’s Academy for Witches with these reissued editions featuring energetic covers.

Mildred Hubble is determined that her third year at Miss Cackle’s Academy for Witches will be her best. And when the horrible Miss Hardbroom is replaced by a new teacher, things finally seem to be going Mildred’s way. But the new teacher is very strange. . . .

Jill Murphy (1949-2021) began drawing and writing stories at a very early age and was already putting books together (albeit with a stapler) by the time she was six. She was only eighteen when she wrote The Worst Witch. Her books about the lovable but disaster-prone Mildred Hubble sold more than five million copies worldwide and became much-loved classics. Jill Murphy also wrote and illustrated several award-winning picture books for younger children.

The girls set off to put their suitcases and cats into their rooms and to get
themselves tidied up before assembly, which was held in the Great Hall. Mildred was delighted to find that she now had six bats roosting along her picture rail, instead of the usual three. She was mad about animals and, although the bats didn’t do very much except sleep all day — occasionally stretching a wing or shuffling along a bit — it was nice to know they were there. In the early hours, when Mildred was often lying awake worrying about a looming potion test or some similar horror, it was always comforting to see her little flock come in from their night’s hunting and
jostle into position upside down.

It only took a few minutes for Mildred to unpack her suitcase and put
away her clothes, so she decided to nip along the corridor to Maud’s room.

"Have you got that styling brush, Maud?" she asked, letting herself in through the heavy oak door. "I’d like to have a little twirl with it and see if I can liven up my hair a bit."

Maud was still cramming her clothes into her tiny wardrobe. All the pupils had a wardrobe, with space on one side for their robes and shirts and
a narrow set of drawers on the other side, which was not big enough to take a term’s supply of socks and underclothes and was, therefore, very
difficult to keep tidy.

"Of course you can, Mildred," said Maud cheerily. "It’s on the bed there.
Just push up the switch at the side and it makes a hissing sound, then gets warm in a few minutes."

She was about to close the door as she left the room when Enid came up
behind her.

"Not yet," replied Mildred. "I’m going to have a go at beautifying myself
with Maud’s magic brush here," and she skipped off down the corridor back to her room.

"What do you make of our new form mistress, then?" asked Enid, settling on the end of Maud’s bed with her knees pulled up under her chin.

Maud stuffed the last pair of grey-and-black-striped pyjamas into the bottom drawer and closed the wardrobe door.

"She’s a bit weird-looking, isn’t she?" said Maud. "I’m surprised H.B. let her over the doorstep. She’s so — everything H.B. can’t stand, isn’t she? Nervous, twittering, doesn’t look as if she could control a dead budgerigar — and that funny little voice and all those frivolous curls!"

Enid laughed. "Come on," she said, "let’s go and help Mildred with her
hair."

"Yes, let’s," said Maud, heading for the door. "I meant to warn her to be
careful. It’s really easy to get the brush tangled if your hair’s long."

She stopped abruptly as she saw Mildred sitting on her bed with the styling brush and her hair rolled up in a great messy loop right against her
scalp. She was desperately trying to unroll it, but the brush was held as
tightly as a fly parcelled up in a spider’s web.

"It’s got stuck, Maud!" said Mildred, trying not to cry. "I mean really stuck! I’ve turned it off but it’s still burning hot and the brush is black so you can’t see where the hair ends and the brush begins."

"Don’t panic, Mildred," said Enid, trying to sound soothing, despite the
horrified tone in her own voice.

"That’s right," said Maud. "Just leave it and let Enid and me sort it out. Bend your head towards the window so we can see what we’re doing."

Mildred bent her head so that Maud and Enid could assess the situation. It was not good. In the dim light filtering through the narrow castle window, they could see that Mildred had twirled up a large hank of her waist-length hair, which had spiralled round the brush into a hopeless tangle. Maud and Enid exchanged appalled glances. They looked even more horrified when the bell for assembly began to clang urgently through the corridors.

"Oh, no!" said Mildred, bursting into tears. "Why on earth do these things always happen to me? I can’t go down to assembly like this. H.B. will
go bonkers!"

"Hang on, Mildred," said Maud, jumping up. "Perhaps I can find someone to help."

She opened the door just as Ethel Hallow was walking past. Ethel looked
in at Mildred. "Oh, dear," she said, "what have you done now?"

To everyone’s surprise, Ethel looked suddenly genuinely concerned. "Sorry, Mildred," she said. "Of course it’s awful, but luckily I know just what to do. Hang on a sec."

She went over to the window in an authoritative manner, bent Mildred’s
head towards her and began busily working on the hair and brush as if
she knew exactly how to help. No one could quite see what she was doing and by the time they realized it was too late. Ethel had taken a pair of scissors from the jar on Mildred’s windowsill and cut the brush out of
Mildred’s hair, leaving a tuft about three centimetres long and ten centimetres wide.

"Ethel!" exclaimed Maud and Enid together. "You are unbelievable! Look
what you’ve done!"

Mildred leapt up, feeling the space where the brush had been, and rushed to look in the mirror, which hung just below the bats.

"Well, you asked me to help!" said Ethel, sounding offended.

"No, I didn’t!" snapped Mildred hotly. "You just barged in here and hacked a huge lump of my hair off !"