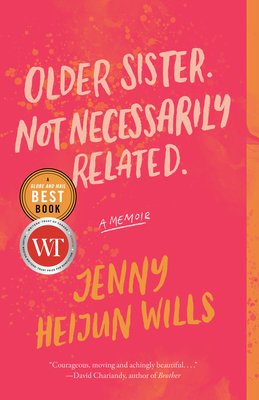 Winner of the 2019 Hilary Weston Writers' Trust Prize for Nonfiction

A beautiful and haunting memoir of kinship and culture rediscovered.

Jenny Heijun Wills was born in Korea and adopted as an infant into a white family in small-town Canada. In her late twenties, she reconnected with her first family and returned to Seoul where she spent four months getting to know other adoptees, as well as her Korean mother, father, siblings, and extended family. At the guesthouse for transnational adoptees where she lived, alliances were troubled by violence and fraught with the trauma of separation and of cultural illiteracy. Unsurprisingly, heartbreakingly, Wills found that her nascent relationships with her family were similarly fraught.

Ten years later, Wills sustains close ties with her Korean family. Her Korean parents and her younger sister attended her wedding in Montreal, and that same sister now lives in Canada. Remarkably, meeting Jenny caused her birth parents to reunite after having been estranged since her adoption. Little by little, Jenny Heijun Wills is learning and relearning her stories and those of her biological kin, piecing together a fragmented life into something resembling a whole.

Delving into gender, class, racial, and ethnic complexities, as well as into the complex relationships between Korean women--sisters, mothers and daughters, grandmothers and grandchildren, aunts and nieces--Older Sister. Not Necessarily Related. describes in visceral, lyrical prose the painful ripple effects that follow a child's removal from a family, and the rewards that can flow from both struggle and forgiveness.

JENNY HEIJUN WILLS has lived, studied, and worked in Toronto, Montreal, Boston, and Seoul. She currently teaches at the University of Winnipeg in Manitoba.

"Finely observed, meticulous, and candid, this memoir offers its subjects no easy redemptions, only the chance to grow together towards greater understanding. Older Sister. Not Necessarily Related. captures Canada at its richest, deeply rooted in home while also very much part of the world." —2019 Hilary Weston Writers' Trust Prize for Nonfiction Jury

“Reflecting on that which families, in various incarnations, might owe to each other, Older Sister. Not Necessarily Related forges and mourns familial bonds in necessarily relatable and devastatingly exceptional ways.”—Nyala Ali, Winnipeg Free Press

“One of the most courageous, moving and achingly beautiful memoirs I’ve ever read. Jenny Heijun Wills brings uniquely to voice the complex emotional landscapes of transnational adoption. Her book represents an urgent and wide-reaching social question in the most luminously intimate terms." —David Chariandy, author of Brother

“In Older Sister, Wills has made a searching, fearless mix of memoir and fiction to do the impossible: to put a story together of her family and herself, made out of the mix of rumor and fact, lost, found and false left for a Korean adoptee. Much the way she invented herself, she invents the story here, locating her authenticity ultimately in herself. An electric meditation on connection, culture and desire.” —Alexander Chee, author of How to Write an Autobiographical Novel

“Adoption is a complex, provocative issue. Mix it with differences in race, nationality, and culture, and adoption becomes volatile. Jenny Heijun Wills is exactly the person we need to write about this volatility. Smart, critical, and edgy, Wills brings a sensitive, historically informed, and intersectional consciousness to this topic. The result is an urgent and necessary book.” —Viet Thanh Nguyen, author of The Sympathizer

“Older Sister by Jenny Heijun Wills will resonate with anyone who has grappled with their identity, their definition of family, their roots. Who has wondered who am I and how did I get here? In excavating the common human condition of not fitting in, Wills's memoir reveals a unique mind, and more than once I found myself remembering the story of The Ugly Duckling, and better understanding my own search for belonging and becoming.” —Yasuko Thanh, Mistakes to Run With

"Jenny Heijun Wills has no interest in easy answers or comforting fictions. She sees herself and the world around her with an unsparing, incisive clarity, rendering her experiences in their full complexity, horror, and beauty. Older Sister is a memoir of lasting power, a vivid and intimate story of urgent, far-reaching consequence." —Kim Fu, author of The Lost Girls of Camp Forevermore